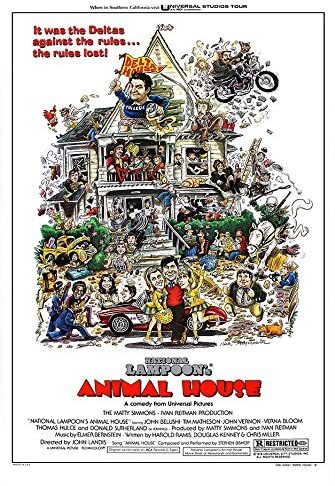 We do anything we want. We're college students!
"Animal House, House, House
Nobody ever went to class,
Then we saw Donald Sutherland's ass
Then they did the end like American Graffiti,
Where you find out what happened to everyone."
— Homer Simpson's unique summary of Animal House, to the tune of the Animal House Theme Tune
Advertisement:

Animal House is a classic 1978 comedy film about the wacky hijinx of the members of the Delta fraternity at "Faber College" in 1962, as they fight against the snooty Omegas and the uptight dean Vernon Wormer.

Directed by John Landis, Animal House launched the film career of Saturday Night Live cast member John Belushi. Inspired dozens of Follow the Leader takes on the raunchy college frat movie, including some by National Lampoon themselves. Spawned a spinoff TV series called Delta House, which only lasted one season. And perhaps most importantly, revived the popularity of movies featuring teenagers and younger twentysomethings, which had been largely absent from movie screens since American Graffiti, five years earlier.

The cast is filled with either breakout stars of the era or future stars. John Belushi plays Bluto, the most anarchic of the Deltas. Tim Matheson plays Otter, Delta House's unofficial leader. Kevin Bacon made his film debut as Chip, an Omega pledge. Peter Riegert is Boon, the one Jew in otherwise very WASP-y Delta House. Karen Allen is Boon's girlfriend Katy. Bruce McGill, who has since appeared in more than a hundred films as a character actor, plays D-Day in one of his earliest roles. John Vernon, on the other hand, was already a veteran character actor with almost two decades experience, but Dean Vernon Wormer is one of his most memorable roles. The one established star in the film is Donald Sutherland, who has a small but notable part as a hippie teacher.

Written by a guy from Harvard, advised by a guy from Dartmouth; and if you happen to visit the latter you can buy all sorts of Animal House-themed memorabilia in the co-op.

May hold the record for most releases ever

on the notorious MCA DiscoVision label, and also one of the earliest 2-hour videodisc releases.