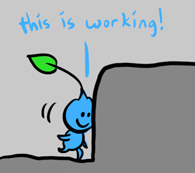 In which one gets up close and personal with a wall for an extended period of time.

For whatever reason, a character will find themselves either running aimlessly with their face against the bricks or slamming into said bricks, over and over and over again.

In most media, it's a Comedy Trope where the affliction's caused by the character is being incompetent, misled, etc. and steered into a dead end. And staying in that dead end. Alternately, it may be an overdramatic gesture to bonk one's head against a wall as if punishing oneself for one's mistakes or perceived idiocy; that one can be Truth in Televisionnote  but you local skull doctor says you shouldn't put too much strength into it. It hurts. And it scrapes the wallpaper..

In video games, however, when it's simply the game designers not bothering with a "unit has detected a wall and is stopping short" animation, it most often shows up as a common glitch. Collision data is complicated — No matter how smart the AI is, there's bound to be some problems where they forget the location of a wall or a building and just try to run through it, sometimes for hours if the player doesn't intervene somehow. Another, more common variation is that they strangely slide sideways while running until they find a path that they can run through. This is often caused by The All-Seeing A.I. when the player's location is always detected, but in exchange for everything else. As minor instances are pretty common, generally only examples that either affect gameplay or are interesting to look at should be added for this type. If a player's avatar in an online game winds up doing this, lag is usually the culprit. Other times, however, certain types of gamers such as Speedrunners can invoke this as sometimes it can, when done "correctly", allow them to clip through games' boundaries so that they may finish them faster or outright skip huge portions of them.

The video game variant is a subtrope of Artificial Stupidity.

by Weebl gives off the impression that the "male" bot has glitched and is just repeatedly bumping into the table which the "she-computer" rests on.
Webcomics
Web Videos
Western Animation
Real Life
Feedback

Fire Quacker guides Blair Trigger to the kitchen, though she keeps having him bump into walls.

Fire Quacker guides Blair Trigger to the kitchen, though she keeps having him bump into walls.