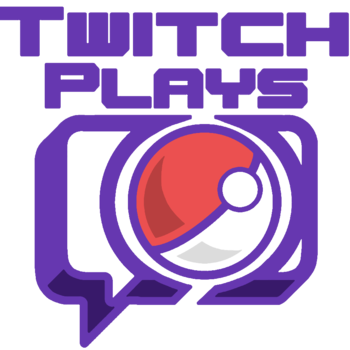 (TPP) is a series of social experiments that started in February 2014 in which commands representing buttons on the requisite Nintendo console are entered into a chat on Twitch, and then translated into a game of Pokémon via an IRC bot. In short, a horde of people fighting over a controller (at its peak, over 100,000). Throughout its life, Twitch Plays Pokémon has spawned hilarious characters, memorable moments, and even a few joke religions.

The very first and most well-known run began on February 12th, 2014, featuring the game Pokémon Red. It quickly and unexpectedly exploded in popularity, achieving an average viewership of 88,000 viewers and grabbing the attention of both numerous media outlets and the Twitch staff themselves. The game was completed after 16 days of continuous gameplay, and other Pokémon games thus followed; while the stream never reached anywhere close to its initial popularity, it is still running to this very day.

There are currently 62 completed main runsnote The stream considers both Touhoumon and Moemon as the 12th run, as well as both Red and Blue from the fourth anniversary as the 28th run. Each of the six runs of The Gauntlet is however counted separately, as the 41st to 46th run., as well as numerous intermissions, the most prominent being betting matches set up using Pokémon Stadium 2 then later Pokémon Battle Revolution, and sidegames which are played alongside said betting matches at the pace of one input between each match.

Main runs are played mainly in Anarchy mode, meaning every input is read one after the other continuously, but sometimes allow for the activation of Democracy mode, in which users instead vote for the next input or string of input at regular intervals. In those instances, the specific commands "anarchy" and "democracy" allow users to decide on whether to stay on the current mode or switch to the other.

Additional modes include Commander mode, which automatically determines the next input towards a desired action ("move", "item", "switch", "run"), Military mode, an earlier and less functional version of Commander mode that performed the entire action at once, Congress modenote often referred to simply as a subset of Democracy mode, which is used for sidegames and in which users vote for a single input every few minutes, and Turbo Anarchy, a much-derided mechanic that randomly picked from the last few inputs without break.

Of note is that the title of "Streamer" is usually employed to refer to the person in charge of the stream as a whole, but does not necessarily equate to the person actually hosting it. The runs were first hosted by the original Streamer ("TwitchPlaysPokemon" or "OG Streamer") until DekuNukem hosted them from the first Nintendo 3DS run to the third, after which the stream was hosted by s_SoNick, and finally by m4_used_rollout starting in mid-2017. The original Streamer stepped down altogether in late 2017, leaving the title of Streamer to Aissurtievos for the last run of Season 4, then to Chaos_Lord after said run ended, to ax6 between Season 7 and 8, and finally to m4_used_rollout in mid-2021.

TPP won the award for "Best Fan Creation" in the first-ever The Game Awards in 2014, and a Guinness World Record for the most participants on a single-player online video game. It has also spawned many, many snowclones, leading to the creation of a "Twitch Plays" category on Twitch, one of the most notable being Fish Plays Pokemon, in which a fish plays Pokémon Red.

The official stream can be found here

. The stream's official subreddit can be visited here

. For archived progress of the runs, go here 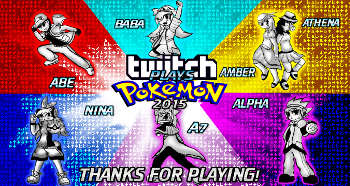 Season 2, Glitches and Shadows and Moes and Fish.
Source

Tropes that apply to all of Twitch Plays Pokémon: