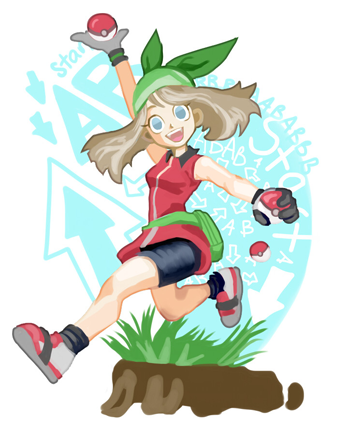 Twitch Plays Pokémon (TPP) is a series of social experiments that started in February 2014 in which commands representing buttons on an original Game Boy Advance (Up, Down, Left, Right, A, B, L, R, Start; with Select being re-enabled later on during the event) are entered into a chat on Twitch, and then translated into a game of Pokémon via an IRC bot. In short, thousands of people are fighting over a controller. Throughout its life, Twitch Plays Pokémon has spawned hilarious characters, memorable moments, and even a few religions.

With the the first and second experiments successfully finished, a third run started on March 22, 2014note Ten years to the day after another Generation III game was released in North America. Just a coincidence, though., in the next generation of the series, Pokémon Emerald.

This time around, the mob followed the adventures of a young girl named A (also known as Camila A. Slash and colloquially known as A-chan). But from the moment A chose a Torchic (named "Zexy") instead of the mob's preferred choice of a Treecko, A has shown a surprising... disregard for her legion-esque masters. Does this have something to do with the strange temporal distortions that heralded the start of her journey?note actually a number of accidental soft-resets that managed to erase at least seven protagonists from history before the Select button was disabled Will it be the mob leading A, or will she be the one leading them?

After 20 days, 21 hours, 56 minutes and 103 attempts, mere 3 hours before running out of timenote and this is after a three-day extension beyond the original deadline, A finally managed to defeat Wallace and became a Hoenn Champion. Emerald was promptly followed by Twitch Plays Pokémon FireRed.

Come April 2016, in the lead up PBR 2.0's debut, several older run saves were played. Emerald was the second, following FireRed, around 2 years after it's end. It's brief presence was soon followed by Crystal.