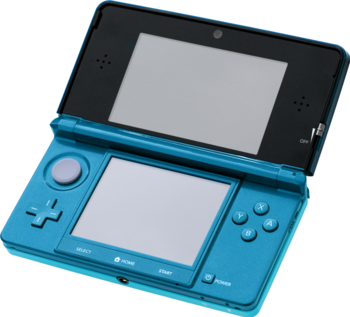 Take a look inside.
We're raising the bar even higher.
Advertisement:

Continuing down the path of technical innovation Nintendo first explored with the Nintendo DS and the Wii, while also learning from the disappointing endeavors of the Virtual Boy, the Nintendo 3DS is a functional 3D handheld console. In many ways, the 3DS builds upon the base formula of its predecessors and improves them. Keeping all the features on the DSi, the 3DS takes the concept of the DS as a whole and adds another dimension to it.

Certainly, the most impressive addition to the handheld is the all-new widescreen top screen that enables 3D view without the use of special glasses, by using a parallax barrier.

3D depth can be adjusted or disabled with a slider on the top screen. This now has relegated the two screens for, more or less, unique functions. The top screen serves as a main screen to show off the 3D capabilities, while the bottom screen is used for additional user input via touchscreen.

Control-wise, the 3DS adds a gyroscope similar to that found in the Wii's Motion Plus controllers, which allowed for gameplay such as motion controlled aiming in first-person. An analog "Circle Pad" similar to (although much larger and easier to use than) the one found on the PSP has been added as well. Other features include two outer cameras can take 3D pictures and a normal camera facing front. The 3DS comes with Augmented Reality capabilities for certain games and features. Wi-Fi has been upgraded to include WPA2, as well as WPA and WEP, which are compatible with DS games that support themnote DS games compatible with all three types of encryption have a string of letters beginning with "TWL" on the front; games that have said string begin with "NTR" are limited to WEP. The Wi-Fi can also receive messages and notifications online while asleep, similar to the Wii. The Friend Code system remains, but is now universal and based on the system itself, rather than per game.

Its online store, the Nintendo eShop, contains new and existing DSiWare games (with a few exceptions), Virtual Console games, new 3D games, and 3D-enhanced versions of old games. 3D video content was also available through its Nintendo Video, where it would cycle music videos, video game trailers, 3D shorts, and eventually full 3D movies. The system can also run Netflix and Hulu Plus. The 3DS has about 3-5 hours of battery life for a 3DS game in 3D mode, and 5-8 hours for a DS game or a 3DS game in 2D mode with Wi-Fi turned on and power-saving mode turned off. Following in the precedent set by the DSi, the 3DS is region-locked for (most) DSi and 3DS games, severely impacting the viability of playing imports, though DS game cards remain exempt from this.note Some DSi games, like the international versions of Pokémon Black and White, do not employ region locking, allowing them to be played on any system of any region.

The 3DS launched in early 2011 with a fairly hefty price tag for a portable console — $250 in the United States, ￥25,000 in Japan, around £220 in the UK, and similar prices elsewhere. While Sony had released the PSP at the same price years early, this made the 3DS more expensive at launch than any previous Nintendo handheld console prior. It was this steep asking price and the system's poor launch line-up that led to the first several months of the console's lifespan failing to meet expectations sales-wise. As such, on August 12th, the 3DS received a worldwide price cut that dropped the cost down by a third; the US price dropped from $250 to $170, for example. Early adopters who had bought the system before this were given access to the 3DS Ambassador Program, an initiative which allowed free early access to 10 NES titles that were later made available for other 3DS owners in North America via Virtual Console, as well as an additional 10 exclusive GBA titles that Nintendo promised would never be made available for other 3DS owners.note As noted on the Virtual Console page, Nintendo managed to keep their promise by making those titles available to the general public on the Wii U instead. Sales increased significantly after this and the release of a couple Killer Apps, and by the end of November 2011 total hardware sales in the US had surpassed that of the original DS's first-year sales

, eventually taking the lead in the handheld gaming market. By the time the PlayStation Vita, its main competitor, hit the market in early 2012, the system had finally hit its stride and would regularly outsell Sony's portable offering by an estimated 5 to 1.

, an accessory which adds another Circle Pad (plus LZ and RZ, 2 additional shoulder triggers) to the device when attached. It launched in Japan in December 2011 along with Monster Hunter 3 Ultimate, the first title to officially support the accessory. It would later become available in the West in February 2012, aligning roughly with the launch of the second compatible title, Resident Evil: Revelations. December 2011 also saw the worldwide launch of Swapnote, a messaging service with its own Mii and other game-like trappings, but which was eventually cut due to misuse.

After a very costly loss

caused partly by the initially low console sales, Nintendo began revamping both the social features of the 3DS as well as the capabilities of its eShop, starting with a small Friend List update, initially made available with all copies of Super Mario 3D Land, that would later be integrated into a large firmware patch which went live mid-December 2011, introducing new features such as 3D video recording/playback and automatic SpotPass software downloads. Soon the eShop would introduce DLC and demo support, and will later add browser and mobile-based access to the eShop. Starting with New Super Mario Bros. 2, the eShop also offered retail games downloadable for purchase. Its services were eventually integrated fully into the Nintendo Network, Nintendo's first attempt at a proper account system, which expanded further to encompass features such as the Miiverse of the Wii U, allowing for cross-platform messaging.

In the same vein as the original DSi XL, a larger model called the 3DS XL was announced in June 2012, released July 28 at Europe and Japan, and August 19 in America, being priced at $200 (£159 in Europe, ￥16074 in Japan). This model is larger with bigger screens and improved battery life (1.5 hours more than the original model). It is a Product Facelift, not a redesign (all software features remain identical and there is no second Circle Pad) and was sold along with the original model. Like the DSi XL, it was mostly designed to accommodate players with poor eyesight and provide longer battery life.

Nintendo then released a third model in Western regions — the Nintendo 2DS, on the same day as the release of Pokémon X and Y. This particular model is a entry-level budget device, initially priced at $129.99 before dropping to $79.99 plus a pre-installed gamenote either New Super Mario Bros. 2 or Mario Kart 7, that replaces the standard DS clam shell design with a flat slate design along with removing the 3D capabilities by replacing the parallax barrier top screen with a normal onenote Teardowns of the device reveal that the 2DS does in fact use just one LCD panel, with separate areas to account for the top and bottom screen. and including a external switch to place it in sleep mode. Capable of playing both regular DS and 3DS games, the 2DS is aimed at younger children or those with specific medical conditions for whom the 3D function of the original device was not recommended.

Much like how the DS received a revision with improved specs in the form of the DSi, the Nintendo 3DS received a revision called the "New Nintendo 3DS", though this iteration went on to completely phase out the original models. The New Nintendo 3DS (often abbreviated as n3DS) has a faster CPU, improved 3D eye-tracking that allows for angled viewing, two additional shoulder buttons and a right-side nub that acts like a second stick (negating the need for a Circle Pad Pro), built-in NFC for amiibo support, and better battery life. A port of Xenoblade Chronicles was released exclusively for the new revision, while other games, such as Super Smash Bros. for Nintendo 3DS, had enhancements to take advantage of the extra power. It launched in Japan on October 11, 2014, followed by a November 21st launch in Australia, and comes in both regular and XL sizes. It went on sale in North America and Europe on February 13, 2015. However, North America only received the New 3DS XL, being the only region to not receive the regular-sized version as a standard retail item, with it only beginning released as a limited edition bundle

with Animal Crossing: Happy Home Designer months later.note Other models of the New 3DS were later released in North America - a second limited edition was released celebrating the 20th anniversary of Pokémon Red and Blue. In addition, a Black Friday 2016 sale allowed you grab a black or white system with Super Mario Bros. face plates for $99.99. The New 3DS XL was initially sold for $250, before being reduced to $200 after older 3DS models were discontinued.

The Nintendo 2DS would also gain the redesign treatment, however, as Nintendo announced the New 2DS XL on April 27, 2017, which returned to a clamshell design and had all the same enhancements as the n3DS minus the 3D display features. The New 2DS XL would release worldwide on July 28, 2017 for $150, and by February 2020, was the only model of the system that was still in production.

Eight years after its introduction, the Nintendo 3DS family continued to remain a valuable pillar of Nintendo's business that helped the company retain profitability during the years of its sister console, the Wii U. Despite speculation that the 3DS would quickly end production in light of the Nintendo Switch's success, Nintendo had re-positioned the device as a budget handheld that they were adamant about supporting well into 2019 and beyond

, by way of releasing remakes/compilations of older games such as Luigi's Mansion and WarioWare Gold, as well as eShop titles like Dillon's Dead-Heat Breakers. However, the low sales of such software led to Nintendo announcing in June 2019 that first-party software development had ceased. The system itself was officially discontinued on September 16, 2020, more than nine years after its original launch. On February 16 2022, it was announced that alongside the Wii U, the 3DS eShop would shut down in late March of 2023, on top of no longer accepting additional funds for purchases after May 23rd, 2022 (for credit cards)note This was already phased out in some regions prior, and you can still add funds via the Switch eShop if you merged the funds or bought via the website and August 29th, 2022 (for prepaid eShop cards).

As with other Nintendo consoles, they've been pretty hush-hush about the specifics, but efforts by the homebrew community have unearthed them.

Built into the system:

These Virtual Console games were given out to early adopters of the original system for free to compensate for the later price drop. The NES games were eventually released to the general public for purchase on the eShop, while the Game Boy Advance games still remain exclusive to Ambassadors. Unlike other 3DS Virtual Console games, the GBA titles lack the ability to use Save States.