Video Game / The Legend of Legacy 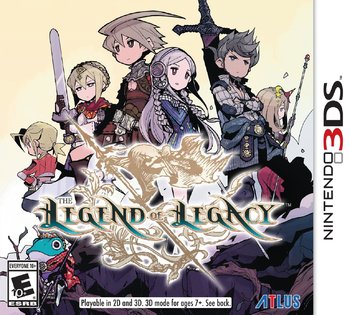 The Legend of Legacy is an RPG created by FuRyu.

A mysterious continent named Avalon has suddenly risen from a deep slumber. The continent itself is greatly unexplored, prompting many adventurers to seek its riches for themselves as well as the mythical Star Graal. Seven of these adventurers explore the uncharted land in hopes of fulfilling their singular dreams and desires, while also cooperating with each other. This merry band of adventurers includes:

One of the game's most notable features is its leveling system: characters don't "level up", their skills do. Have character protect their allies and their Guard skills will increase over time. Have them act as a healer and their Support skills will increase over time. Using a skill a number of times will reward you with a new skill. However, this makes leveling unpredictable - there is no experience bar to gauge how close you are to advancing.

Legend of Legacy provides examples of: