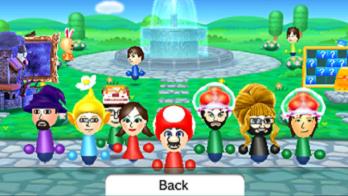 The plaza itself.
I'm Trope-tan from Tropeville. Nice to meet you!
This is what I've been playing recently: TV Tropes
I like video games!
Advertisement:

StreetPass Mii Plaza is a program that came preloaded on the Nintendo 3DS since 2011, and serves to demonstrate the system's StreetPass function. When a player passes by another 3DS owner (who uses the program), that user's Mii will be collected in the main plaza along with some information about them. Miis can also be gathered in the plaza through some other methods, including invitations in certain games and by transferring special golden-pants Miis obtained online.

The program also contains several game modes, and is occasionally updated to add more. One of the original games is Puzzle Swap, in which your goal is to collect pieces of pictures from 3DS owners you pass by. The other is Find Mii (StreetPass Quest in British English), a light RPG where your personal Mii has been captured and others' Miis must be recruited through StreetPass to rescue them. A later update to the Mii Plaza that added new functions also featured additional Puzzle Swap puzzles (and the ability to add more puzzles without a full update) and a new kind of puzzle piece that can only be received through StreetPassing, along with a Find Mii sequel.

An update in June 2013 added four more games for purchase, including

Another update was released in April 2015, which adds a Premium VIP area for purchase and two more paid games:

Another update was released in September 2016, which increases StreetPass hits to 100 by a "queue" feature (Premium only), adds SwiftPlay Plaza for quicker gameplay in the Plaza and five more paid games (Players were allowed to choose between the first two and get one for free.):