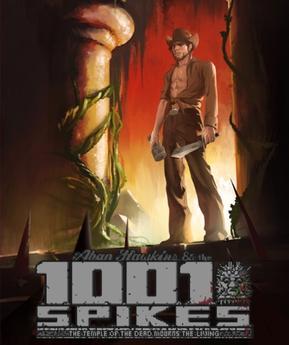 "Gah! What a nuisance! Fine - I'll take your stupid offer! I'm going to get those treasures and throw them into your stupid grave!"
— Aban Hawkins
Advertisement:

Released by Nicalis on the PC, PlayStation 4, PlayStation Vita, Nintendo 3DS, and Wii U in June 2014, 1001 Spikes (Or, its full title, Aban Hawkins and the 1001 Spikes: The Temple of the Dead Mourns the Living) is the... touching story of a Aban Hawkins, a perpetually furious archeologist put against the sort of odds that make Indiana Jones' escapades look like a pleasant stroll to the museum. The hotheaded protagonist is stuck somewhere between being a "Well Done, Son!" Guy and just wanting to punch him in the face, to the point where he is instantaneously spurred into action when he learns of his father's demise and subsquently finds a letter that both mocks him and challenges him to search the lost ruins of Ukampa.

Seen as the twisted lovechild of Super Meat Boy and I Wanna Be the Guy, 1001 Spikes has a title that understates the sheer level of tricks and traps laying before you, giving you 1001 lives to get through them all. The difficulty is somewhere in between the two, combining some trial and error gaming with challenges that require platforming skill as opposed to purely memorisation.

Compare with I Wanna Be the Guy and Super Meat Boy.