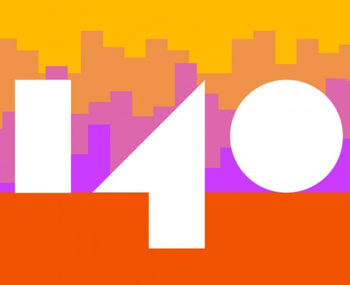 140 is a platforming game with Musical Gameplay elements, developed by Jeppe Carlsen (the lead gameplay designer of Limbo) and released on October 16th, 2013 on PC, before getting ported to Playstation 4, Xbox One and Wii U around September 2016.
Advertisement:

The game epitomizes minimalism - it only has four levels that are composed of primary shapes and colors, capped off by four boss stages that can also be tackled separately. Even the player character is also represented by three primary shapes - square when immobile, circle while "walking", and triangle when jumping. It's also important to move in tune with each level's theme, as many of the platforms and obstacles are synced to it.