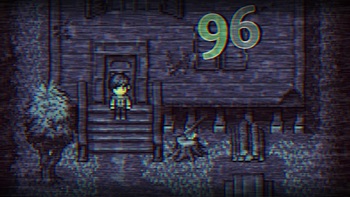 96 is a free-to-play Narrative Horror Game on Free Game Planet.

Niles is the only survivor of a viral outbreak that turned everyone on his island home into violent, flesh-eating savages. He's spent the years since the outbreak started in a cabin with his friend, Sixten. Sadly, Sixten has also succumbed to the infection, so Niles has him Chained to a Bed in the corner of the cabin. He's spent his days since then caring for Sixten and bringing him food.

One day, while out getting food for Sixten, Niles comes across a tent, which he soon discovers is housing a young woman named Elise. From there, a series of events soon occurs that will upend the life Niles has come to know.