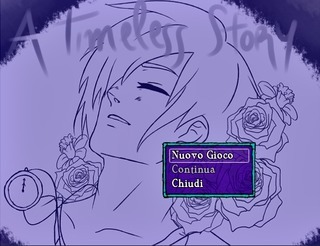 Who Wants to Live Forever?
A Timeless Story is a top-down Adventure Game, developed by an Italian creator Midori Fragments with RPG Maker VX Ace. It was freely released for PC in 2016, and can be found here

Some people never change, in the true sense of the word. Lysander has stopped aging as a result of events that have inextricably tied him to a specific occurrence in his past. But what if he could go back and change those events? Will he manage to let go of his mistakes or will he irreversibly drown in his regrets?

A Timeless Story contains examples of: