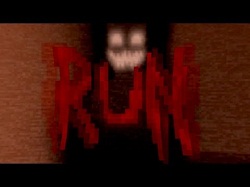 is a short free indie video game. It's a psychological horror game done in first person perspective with pixellated graphics and Adventure Game elements, a style similar to Imscared and I See You.

The game has very little plot or background. All you know is that you are a person who wakes up in a bed in a house. You are trying to get out of the house. This being a horror game, things aren't that simple. In fact, you can't even get out: every time you try, the exit eludes you, and you inevitably find a note, reading which causes you to wake up in bed again. Each time you leave the bedroom, things get stranger and scarier...

Due to the nature of the plot, the game is best experienced yourself. Almost every trope on this page is a spoiler in some way. You have been warned.