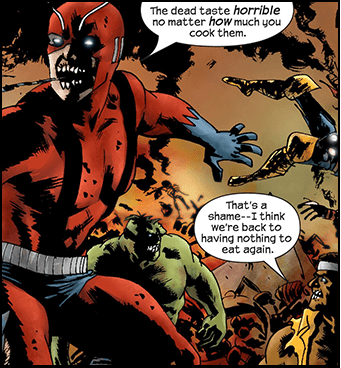 "The normal question, the first question is always; are these cannibals? No, they are not cannibals. Cannibalism in the true sense of the word implies an intraspecies activity. These creatures cannot be considered human. They prey on humans. They do not prey on each other, that's the difference!"
— Dr. Millard Rausch, Dawn of the Dead
Advertisement:

So you're a zombie (sorry to hear that, by the way). You have your daily routine; shamble, moan, be always on the lookout for live human flesh. And when that flesh appears, you and every other zombie in a hundred-mile radius will converge on it in one enormous mass of undeath.

But surely you're not satisfied with that, are you? There's not even close to enough to go around. One human divided among one hundred zombies is less than a meal.

And yet... isn't there still human flesh all around you? After all, the zombies are "human", just a slightly hungrier type of human, and most of the capacity for reason is gone. You still have to eat. Meat is meat. So what's to stop this horde from feeding on itself?

Ultimately, there is no reason; it just plain doesn't happen, and is left at that. We can only say for sure that there are No Zombie Cannibals. When The Virus creates zombies that are still technically alive, there's no perfectly sensible explanation. Additionally, no matter how ravenous, the zombies will cooperate instead of fighting over the scraps.

When it is addressed and sketchily justified, it's usually that zombies will only eat living flesh because undead flesh is "not nutritious" or otherwise appealing, The Virus gives them an instinctive sense to go only after uninfected, or that they're supernatural undead, and thus know not to eat each other and instead cooperate. You can certainly argue that rotting flesh wouldn't be terribly safe to eat, but that would bring up the question of why it can walk around in the first place. If they're the brain-eating sort, it's possible they've all been picked clean already.

Heroes can Pretend They're Dead in order to pass. A Zombie Infectee or Vampire Refugee may be able to pretend to be a zombie and get ignored.

So ubiquitous it's probably better to list aversions, or explicit justifications. The former count as zombie-specific examples of Monstrous Cannibalism.

See also Gang Up on the Human (the Video Game AI version), Ape Shall Never Kill Ape (where "eating" is replaced with "simply killing").