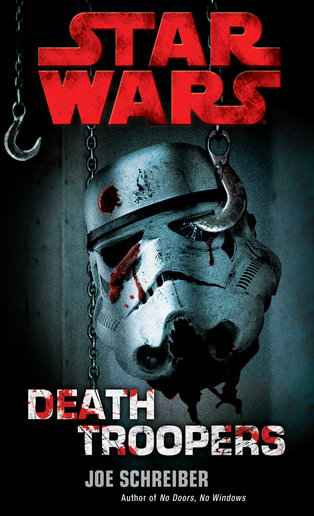 A somewhat Darker and Edgier Star Wars Legends horror novel by Joe Schreiber from 2009 that utilises one of the horror genre's most beloved elements - zombies.

Aboard the Imperial Prison Barge Purge, the engines break down in the middle of nowhere. The only place to repair them is a seemingly-deserted Star Destroyer nearby. After a team is sent over to find the parts, half of them go missing, and the other half bring back a deadly and seemingly-incurable plague to the rest of the guards and inmates. Flesh Eating Zombies ensue.

The story follows six characters - young brothers Trig and Kale Longo, resident doctor and sole female occupant Zahara Cody, sadistic Captain of the Guard Jareth Sartoris along with two prisoners lucky enough to be in solitary confinement until an antibody is found. Together they attempt to escape Purge without succumbing to the ravenous horde of the undead that is roaming both the barge and the nearby Destroyer.

In 2010, it was followed up by a prequel, Star Wars: Red Harvest, which delves into the origins of the virus over three thousand years ago at a Sith Academy. Tie-in content for Star Wars: Galaxies was also produced.