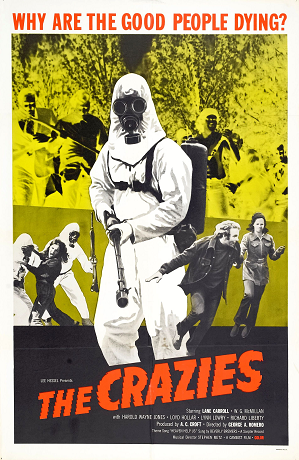 The Crazies (also known as Code Name: Trixie) is a 1973 Sci-Fi Horror movie written and directed by George A. Romero (of Living Dead Series fame).

After its water supply is accidentally contaminated by a bioweapon, a small town in Pennsylvania suffers from a string of violent attacks among its citizens, ranging from beatdowns to arson. Firefighter David (Will McMillan) and his pregnant wife Judy (Lane Carroll) find themselves thrust into all this, and to top things off the U.S. military quarantines the town with orders to shoot and kill anybody who attempts to escape, whether infected or not. Now David and Judy must try their damnedest to leave town before either the infected or the military get them.

Despite failing at the box office and getting mixed reviews, the movie gained a huge cult following and managed to get a remake in 2010.