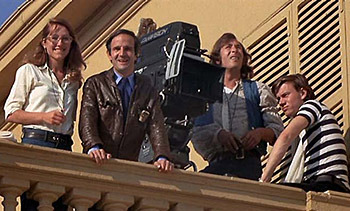 “Shooting a movie is like a stagecoach trip. At first you hope for a nice ride. Then you just hope to reach your destination.”
— Ferrand (François Truffaut)
Advertisement:

It deals with the trials and tribulations of making a film named Meet Pamela, about a woman who has an affair with her father-in-law. However, every possible complication manages to appear, putting the film in jeopardy. Among the happenings during production:

For the filming technique (which the film takes its name from), see Hollywood Darkness.