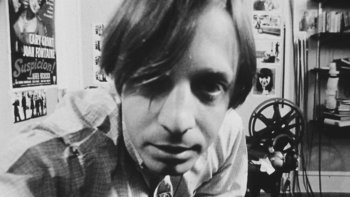 David Holzman's Diary is a 1967 film directed by Jim McBride.

It is a Mockumentary made over a decade before the genre was popularized with This is Spın̈al Tap. David Holzman (L.M. "Kit" Carson) is a young man living in Manhattan who has just lost his job (what sort of job isn't specified), and has also been notified that he has been classified 1-A by the draft board during a bad time to be drafted. Feeling adrift, David elects to make sense of his life by making a documentary, or "video diary", of his life.

His good-looking model girlfriend Penny is extremely irritated by the idea of getting filmed and his friend Pepe pours scorn on the idea, but David pushes forward. His animating goal, to gain understanding of and order in his life, is however a decisive failure. Instead things continue to unravel, with David growing more bitter and erratic as his filming continues.