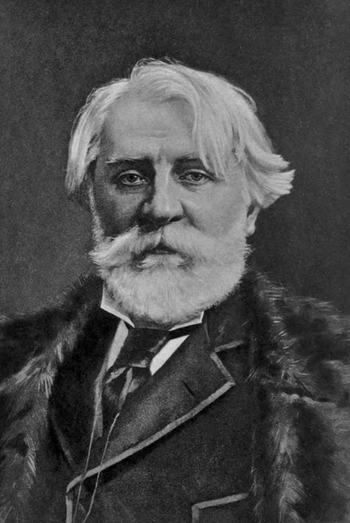 Ivan Turgenev (November 9 1818 – September 3, 1883) was a very important 19th century Russian novelist and short story writer. He was born in an impoverished noble family and started writing prose at the age of 30.

During his career Turgenev penned six full-length novels, his peak time was 1857-62 when he wrote four of those. In his books Turgenev reacted to all important trends in the Russian social and political life. It was an epoch of the drastic change in the Russian society (which, most importanly, included but was not limited to the abolishment of serfdom) and Turgenev became a very significant author who dealt with crucial public issues in his novels. His 1862 work, Fathers and Sons caused a big backlash from the progressives of the time. After that he became significantly less prolific, his last two novels, written from abroad, were met with indifference.

In his era Turgenev was considered the most outstanding Russian author. He helped to generally establish the trope of the "big Russian novel" as his influential works predated main books by both Leo Tolstoy and Fedor Dostoyevsky. Nowadays he is relatively rarely remembered, definitely obscured by these two celebrated classics. He did not have their obcession with ethical and religious issues and can be considered not a Large Ham as opposed to them. Moreover any of his novels is less often brough up than Literature/Oblomov whose protagonist became a household name.

He is most frequently remembered for his novella Mumu, telling about the janitor Guerasim and the eponymous spaniel whose friendship came to a very bitter end.

Turgenev at some point emigrated to France where he lived for the most of the last decades of his life. He became friends with Gustave Flaubert as well as other acclaimed Grench writers of that time.

The style of his prose is considered to be exemplary (definitely better than that of Tolstoy or Dostoyevsky). Dostoyevsky wrote a caricature of Turgenev in Demons presenting him as Karmazinov.