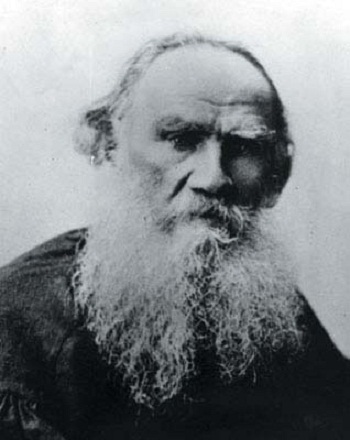 There can be only one permanent revolution — a moral one; the regeneration of the inner man. How is this revolution to take place? Nobody knows how it will take place in humanity, but every man feels it clearly in himself. And yet in our world everybody thinks of changing humanity, and nobody thinks of changing himself.
—Leo Tolstoy, "Three Methods Of Reform" in Pamphlets: Translated from the Russian (translated by Aylmer Maude)
Advertisement:

Count Lev Nikolayevich Tolstoy (Russian: Лев Никола́евич Толсто́й; 9 September [Old Style 28 August] 1828 – 20 November [Old Style 7 November] 1910), usually referred to as Leo Tolstoy, was a Russian writer and philosopher. He is best known internationally for his novels, which include the notorious doorstopping epic War and Peace and Anna Karenina. He also received nominations for the Nobel Prize in Literature every year from 1902 to 1906 and for the Nobel Peace Prize in 1901, 1902, and 1909. He never won, and that is considered to be a major controversy.

Tolstoy was born on 9 September 1828 at Yasnaya Polyana in the Tula province and descended from a well-known Russian noble family. He was the fourth of five children of Count Nikolai Ilyich Tolstoy (1794-1837), a veteran of the Patriotic War of 1812; and Princess Mariya Tolstaya (née Volkonskaya; 1790–1830). They died when he was very young, leaving their children to be raised by their relatives.

He received his primary education at home from French and German tutors. In 1843, he studied Oriental languages and law at the University of Kazan, but failing to excel as a student and being prone to drinking, visiting brothels, and gambling, he ultimately left the university without attaining a degree. He attempted university exams again in the hopes of obtaining a position with the government, but he ended up in Caucusus serving in the army, following in the footsteps of his elder brother in 1851. It was during this time that Tolstoy began writing.

After the defence of Sebastopol, he wrote The Sebastopol Sketches (1855-6), which established his reputation as a writer. After a period in St Petersburg and abroad, where he studied educational methods for use in his school for peasant children in Yasnaya Polyana, he married Sophie Andreyevna Behrs, mostly called Sonya, in 1862. They had thirteen children, and Sonya acted as Tolstoy's secretary, proofreader, and financial manager. In the meantime, Tolstoy continued his educational projects, cared for his peasants, and wrote War and Peace (1865-1868) and Anna Karenina (1874-6).

Upon completing Anna Karenina, Tolstoy fell into a profound state of existential despair and then experienced a profound spiritual awakening. Around 1879-82, Tolstoy wrote A Confession, which marked a change in his life and works. Tolstoy even wrote a series of pamphlets after 1880 in which he espoused indictment to the demands of the flesh, nonviolent resistance, and denunciation of private property, something his wife strongly objected to. This strained their marriage, and Tolstoy eventually conceded his wife the copyrights — and the royalties — to all of his pre-1881 writings. His spiritual awakening also led Tolstoy to become an unorthodox Christian; he rejected the sacraments, miracles, the Holy Trinity, and all other doctrines of the Christian faith. He also rejected the Old Testament and much of the New Testament, accepting only the Sermon on the Mount and nothing more, even composing his own "corrected" version of the Gospels, in which Jesus is portrayed as a merely wise man who arrived at a true account of life. His unorthodox Christian beliefs, also expounded in Resurrection (1899), led to his eventual excommunication by the Russian Orthodox Church in 1901.