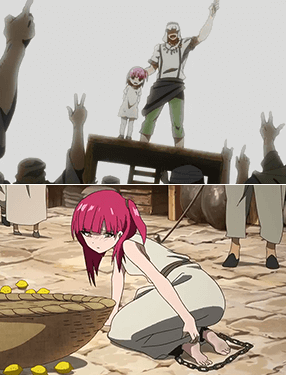 Peridot: Pearls aren't for this! They're for standing around, and looking nice, and holding your stuff for you... right?
Pearl: That's enough! If we're going to work together, you're going to have to listen to me.
Peridot: Listen to you? [to Steven] Did you teach her to talk like this? [...] She's a Pearl. She's a made-to-order servant just like the hundreds of other Pearls being flaunted around back on Homeworld. [...] And she looks like a fancy one, too.
— Steven Universe, "Back to the Barn"
Advertisement:

Go-Go Enslavement and Bathe Her and Bring Her to Me both are based on the idea that enslaving a beautiful person is exciting. It's about dominance and power being combined with sex which turns some people on.

A girl who is born a slave and then grows up to become beautiful is instead about the contrast between her beauty and her circumstances. "A lily among the weeds". This trope has an obvious dark side. Many of these girls are So Beautiful, It's a Curse, forced into wearing revealing clothing and often raped by their masters. Because of this, it's more likely to be the setup to a Rescue Romance. There is also more likely to be emphasis on the girl's purity as well, and the idea that goodness and beauty can be found anywhere, not just in prosperity.

Far too common in Real Life throughout millennia wherever chattel slavery existed.

Only beautiful slave girls that are born slaves or enslaved before puberty should be listed as examples. Post-puberty examples can go into Made a Slave. Often overlaps with Sex Slave. Often represents the highest-value goods in the Slave Market.