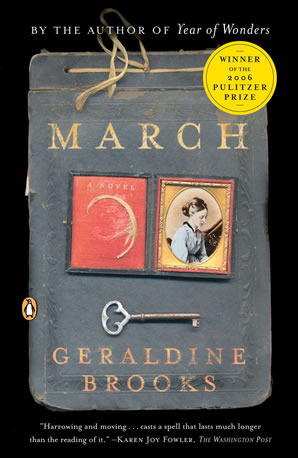 March is a 2008 novel by Geraldine Brooks.

It is, believe it or not, a Fanfic of School Study Media classic Little Women. The original novel deals with the four March sisters, and their saintly mother, Marmee, all living and struggling and growing up at home while patriarch John March is mostly offscreen, serving in The American Civil War as a chaplain. Geraldine Brooks's novel is the story of John March.

, which John March only barely escapes with his life. March goes to a Union military hospital which has been established in the ruins of an old plantation. He is shocked to meet one Grace Clement, a beautiful recently freed slave whom March met some twenty-odd years before, when he was an itinerant peddler roaming through the South. His reunion with Grace sets March off on a series of flashbacks in which he remembers his youth, his business career, his romance with Marmee, and the births of his daughters. Finally, after the flashbacks catch up with the present-day narrative, John March is sent out to educate the slaves on a newly liberated plantation, where they are laboring to grow cotton for the Union. Things go horribly wrong.