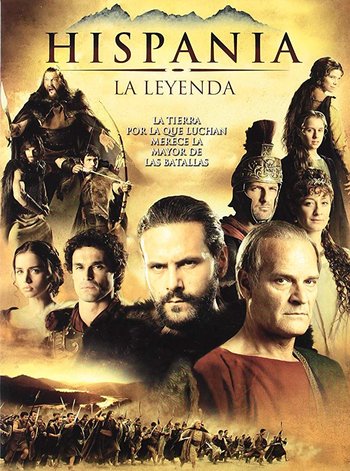 "I swear to you that, each night, there will be one less Roman in Hispania!"
— Viriato in the first episode

Hispania tells the story of Viriato

, a Lusitanian man who, when The Roman Republic invaded Hispania, went into the mountains and started a guerrilla war against the Romans in an effort to expel them from his beloved Hispania. Thus, it adapts (very loosely) the last act of the Lusitanian Wars.

The series proper starts with the attack to one town where the people are celebrating the wedding between Paulo and Nerea. The Romans kill several people and imprison many more to sell them as slaves, amongst them Nerea, who is taken away while Paulo can't do anything but watch as the Romans do so.

This action sparks fear in many of the nearby towns, one of them being Caura. Viriato, a widower, lives there with his daughter Altea, and works as a goat-herder for one of the richest men in the town, Teodoro. Helena - Teodoro's daughter - and Viriato love each other, but Teodoro doesn't want him to come near his daughter, as he is planning to marry her to someone else of their social level. Without anyone knowing it, Teodoro is also a mole for the Romans, led by praetor Servio Sulpicio Galba

and his general, Marco. The Roman camp also hosts Claudia, Galba's wife, who hates him for bringing her to Hispania and because he sleeps around with her slave Sabina.

When Teodoro goes to tell Galba that the Hispanian people are willing to make a deal with him, Galba says that if the men of Hispania go to a certain plain and give out all of their weapons, he will stop making war with them. Viriato, and many others with him - his brother-in-law Sandro one of them - go to the designated place, because they don't want war. Altea comes with her father, and he relents. However, everything is a trap: when the Hispanians give their weapons, Roman troops surround them and start a massacre. Few people survive: Viriato fell to the ground, injured, and the last thing he saw was her daughter being corralled by the Romans. Believing her to be dead, Viriato swears a Blood Oath to fight the Romans as revenge for what they have done to his people and, especially, his daughter.