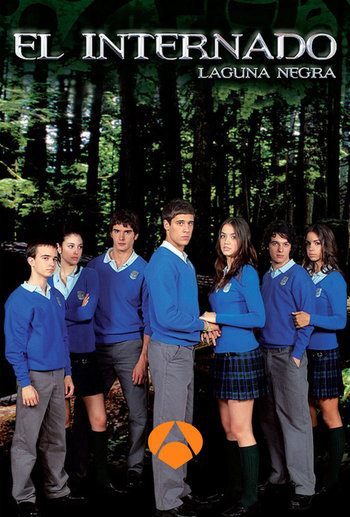 The series starts with the Novoa Pazos siblings, 16-year-old Marcos (Martín Rivas) and 5-year-old Paula (Carlota García), arriving to the Internado Laguna Negra (Black Lagoon Boarding School in Spanish), a school created by its current headmaster, Héctor de la Vega (Luis Merlo), in the middle of a forest quite far away from the city, at the start of the school year. Their parents disappeared while they were travelling on a ship in the Aegean Sea, and now they have found that Héctor is their new tutor. At the same time, a woman called María Almagro (Marta Torné) arrives to take a job as the one in charge of cleaning the building, but her reasons for being at the Laguna Negra are very different: her son, who was sold by her boyfriend when she gave birth, is studying at the school, and she is determined to finally meet him sixteen years after she gave brith to him.

There, both Marcos and Paula will meet people their age. He will make friends with Iván Noiret León (Yon González), son of the main shareholder of the boarding school; Carolina "Carol" Leal Solís (Ana de Armas), Iván's girlfriend, and whom Marcos is immediately attracted to; Roque Sánchez Navas (Daniel Retuerta), one of Iván's best friends, and Victoria "Vicky" Martínez (Elena Furiase), a very intelligent girl and best friends with Carol. Meanwhile, Paula makes friends with Evelyn (Denissé Peña), a happy-go-lucky girl who seems to be very knowledgeable of the adult world, but with twisted facts as she doesn't actually understand everything.

However, things soon take a turn towards the weird and mysterious when one of the professors, Alfonso Ceballos (Paco Merino) tells Carol and Vicky that they are in danger of dying, and disappears a few days later. From there on, the teenagers start to investigate what happened to him, without knowing that behind of not only Alfonso's disappearance, but also Marcos' parents' disappearance and indeed the very past and future of everyone living in the school is an ancient conspiracy tied to the origins of the boarding school as an orphanage and the actions of a group of people trying to prevent that conspiracy from actually taking fruit.

Years after the end of the series, Amazon acquired the rights to stream the show and produce a reboot, El internado: Las Cumbres, which premiered on Prime Video on February 2021.