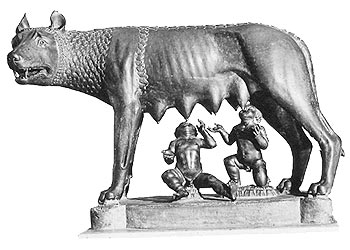 Romulus and Remus, Rome's legendary foundersnote The babies are a 15th-century addition to the older wolf statue. Art historians generally date the wolf to the 11th or 12th century, though it might be an imitation of an earlier Roman work.
"There was once a dream that was Rome. You could only whisper it. Anything more than a whisper and it would vanish... it was so fragile."
— Marcus Aurelius, Gladiator
Advertisement:

The Republic and City of Rome, has several origin tales. In the years of the Republic, its founders were Romulus and Remus, Raised by Wolves, founded the city itself on the curiously precise date April 21st, 753 BC. This was the origin most popular and beloved by the Roman people during the Republican era. Aspects about the founding myths have a curious plausibility and the idea that the original Romans were an outlaw band or fleeing refugees does seem believable. Rome, founded on the seven hills, was ruled by a succession of seven kings, the last few showing heavy Etruscan influence. Another legend, dating much later after contact with Greece, argued that the Romans were descendants of Aeneas and Trojan exiles from the Sack of Troy. Much later, The Aeneid put Canon Welding by stating that they were founded in fact by refugees from the sack of Troy and that Aeneas is the true founder of Rome. This origin was obviously favorably to Augustus, the commissioner of the epic, who saw Aeneas as a Propaganda Hero, and coincidentally, Augustus' Julio-Claudian family claimed descent from Aeneas as well so Rome was intended to be an Empire all along, isn't that convenient. As such, historians tend to favor Romus and Romulus as a more authentic founding myth, albeit they note that it's not the only one.

The second one is the overthrow of the Tarquins. The Romans were once a Kingdom ruled by this Etruscan family. Their last King was the tyrant Tarquinius Superbus (Tarquin the Proudnote Put out of your mind all thoughts of a large public transport vehicle that uses its powers to fight crime). This King was overthrown by conspirators from the aristocratic families, led by Lucius Brutus. After overthrowing the King, he and his fellow aristocrats swore a vow that Rome would never be ruled by a King. They formed what they called a respublica (literally, "Thing of the People"), from which we gain the term "Republic."note As well as "Commonwealth," a translation of res publica into 17th-century English. Rome was organized as an oligarchy with the Aristocracy, called patricians or "fathers", controlling the Senate (derived from senex, meaning "old man"), though the public had some say on the issues through the tribunesnote This office was created about 250 years after the republic's founding. Details are at The Other Wiki. (lit. Protector of the Tribes) who had veto power over the Senate, as well as the less formal ability to beg favors from their patrons. This organization is reflected in the famous Roman slogan SPQR which stands for Senatus Populusque Romanus, or "The Senate and People of Rome." The Republic in social structure was quite family-oriented with various clans becoming centers of webs of patronage, a patron/client relationship that has modern answers in political machines and The Mafia. While Rome's system was oligarchical by modern standards it had for its time a reputation for justice and stability and its elaborate checks and balances were often admired by Greeks whose cities were often troubled by chaos.

The Republic expanded through Italy both through its Badass Army and its genius for wooing conquered people from nearby cities who shared similar cultures. The extreme early myths such as the Rape of the Sabine Women portray how much of Rome's early growth was due to both of these factors. At this point Rome was a regional power in Italy. The three Punic Wars took Rome from merely being the dominant power in Italy to become the largest power in the Mediterranean Basin (to the point where the Romans simply called the Mediterranean Mare Nostrum, or "Our Sea"). The best known of these wars was the Second Punic War, involving the famous Hannibal. Due to these conflicts, Rome inherited the domains of Carthage's Empire, and sway over the Mediterranean rim. Unfortunately, the Roman governmental system wasn't up to governing a large multicultural empire, and internal power struggles grew more and more intense. Added to this was massive corruption and outright stealing of veterans' lands by large landowners. Popular pressure (represented by the famous Gracchi brothers) and Civil War broke out (first between Marius and Sulla, following a war with the Italian "allies"; then between Pompey the Great and Caesar), until finally The Republic was taken over by Julius Caesar. Caesar's successor Octavian, after a long struggle first with Caesar's assassins, then with Caesar's right-hand man Marc Antony, assumed the name Augustus and supreme power as the first Emperor of Rome (princeps, lit. "first citizen," originally a title awarded to the person entitled to speak first in the Senate—Augustus was leery of putting on airs. "Emperor" came from "Imperator" or "commander" in Latin, i.e. commander-in-chief of the armed forces, another of his titles. Obviously having the military backing him was essential for his regime). Though Augustus pretended he was merely first among equals and actually declared the Republic restored, the ascension of Augustus is considered the death of the Republic.

The Republic had a succession of executive magistrates with one-year terms, including quaestors (low-level magistrates, 20 a year), praetors (mid-level judicial magistrates, the lowest office to grant its holder the benefit of lictors/bodyguards carrying around their telltale ''fasces''), and two consuls (top executives with executive powers checked only by each other and the Senate). In addition, the Republic came with a safety valve: in times of crisis, a six-month term for a special office, dictator, could be granted to one person, granting him complete control of the state. There could be good dictators (Cincinnatus, Quintus Fabius Maximus Cunctator), who owing to the strong political culture of civic virtue and patriotism would ostentatiously step down and relinquish powers back to the (unwritten) constitution, especially since there was no political advantage and pressure in using those powers when the interests of the oligarchy were safely kept in balance with that of the Plebs. This decayed in the final century of the Republic where dictators like Sulla and then Julius Caesar would declare themselves dictator pro vita, or dictator for life, granting them supreme power to act on behalf of the interests of the Optimate and Popularii faction respectively.

The Optimates were traditionalists who sought to maintain the power of the Senatorial class (ie themselves)note Roman society, by law, was divided into 5 (later 6) classes based entirely on wealth, not birth. Adjustments were made every five years according to the survey conducted by the Censors, the census. Many families could claim patrician status but didn't have the money to qualify them for the Senate (e.g. Julius Caesar's grandfather), and were sometimes downright poor (Cornelius Sulla). above all else. The Populares were populists who sought (or claimed to seek) to make the lives of the lower classes better. Contrary to what might be expected, by the time of the late Republic patrician families only made up a minority in the Senate; plebeians (that is, anyone not a patrician) could be just as wealthy and powerful and by Marius' day the majority of the Senatorial class were from plebeian families.note In many ways, being a patrician was a disadvantage to a political career, since many offices were reserved to plebeians, such as the influential Tribunes of the Plebs. Moreover, one of each year's pair of consuls had to be a plebeian; thus there were often two plebeians in the top magistracy but never two patricians. Some ambitious men of patrician family, such as Publius Clodius, had themselves adopted by plebeians simply to get out from under the political disabilities of their birth. There were several plebeians who were leaders among the the Optimates, to preserve their own power or simply to arrest the power of Popularii demagogues like Caesar, including such notables as Cato and Cicero. Conversely, the Popularii faction was often led by patricians like Caesar, though the the movement had originally been founded by the plebian Gracchi brothers and it was Caesar's plebian uncle and mentor Gaius Marius who brought him into the Popularii fold. It's quite unclear whether the Popularii genuinely cared much about the commoners' well-being (whether plebian or patrician, the Popularii leaders were always rich enough to become Senators and thus had little in common with the average Roman), or just saw they greatly outnumbered the upper classes and wanted to prevent proletarian rebellions, or saw the mob as a path to political power for themselves.

The Roman Republic left a lot of imprints in Western culture in fields ranging from military tactics to engineering to philosophy (when they weren't plagiarizing the Greeks) to rhetoric (Marcus Tullius Cicero especially) to politics and the nice big one, law. The legal systems of most of Europe are wholesale borrowings of Roman Law with some adjustments, and even English-speaking nations will find a lot of old Roman Law in their own (the first rule of codified Roman Law is otherwise known as the subpoena).

Episodes from the history of the Roman Republic that show up in fiction, folklore, art, and literary references with some frequency are:

See also The Roman Empire, its successor state. For the Roman Army specifically, see The Glory That Was Rome. See also the following pages of eminent figures of the Roman Republic:

Works about or including the Roman Republic include: