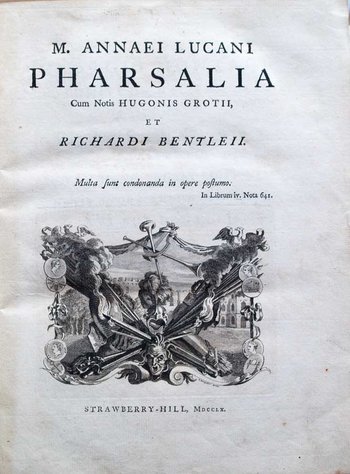 Pharsalia, or Bellum Civile (The Civil War), is an epic poem by the first century AD Roman poet Lucan. It covers the Roman Civil War between Julius Caesar and Pompey the Great, from the former's crossing of the Rubicon to his seduction by Cleopatra. It was still in progress when Lucan was forced to commit suicide for conspiracy to kill Emperor Nero. This gave it the mother of all Classical cliffhangers, with Caesar in the midst of a sword fight with Ganymede, a partisan of Cleopatra's brother Ptolemy.

What makes the Pharsalia special among epics is Lucan's decision to depict the gods as dead. Other Roman poets had attempted to portray relatively-recent history, such as the Second Punic War, as world-historical events on par with the Trojan War. All they succeeded in doing was producing knockoffs of The Iliad. Lucan abandoned the Homeric trope of human conflict as a family feud among the Olympians. Every bad thing that happens can be ascribed entirely to human leaders, with the issue of why these particular men had power being ascribed to the Stoic concept of "fate."

Despite its unfinished status, the epic was a huge success and remained a popular school text as long as Latin was the language of instruction, though never enjoying universal use like The Aeneid and The Metamorphoses.