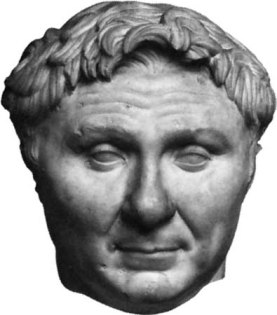 "What! Will you never cease prating of laws to us that have swords by our sides?
Advertisement:

Gnaeus Pompeius Magnus, better known simply as Pompey or Pompey the Great ('Magnus' means 'great'), was an ancient Roman general, politician, and the most famous rival of Julius Caesar.

Pompey was born in 106 BC to a very rich but not very distinguished family—his father had managed to become consul, but otherwise the members of gens Pompeia were rural nobodies, and Pompey was very much an outsider in the Roman political world. His father allied with the dictator Sulla against the Marians, and he died during a Siege in a conflict against the Marians, either directly or by disease. The Marians issued an order of arrest and seizure of assets, citing his father's corruption (either actual or alleged). The young Pompey managed to clear his name during the first civil war, but then the Marians took over the capital, triggering Sulla's second war. At the age of twenty-three, he illegally raised a private army made up of his father's old clients. When Sulla won, young Pompey, alongside other Sullans, such as Marcus Licinus Crassus helped the dictator with The Purge of the capital. Pompey earned the nickname adulescens carnifex (teenage butcher) during this time.

He had ruthless ambition as a young man and saw Sulla's brazen power-grab and trampling of norms as a way for young men to set their path forward. Indeed he was known to say "If Sulla could do it, why not I?" which annoyed the older man in time. Pompey nagged him for a triumph in the capital for his services in Sulla's wars in Africa. Sulla eventually agreed even if Pompey was too young and legally had not earned the ranks of quaestor and consulship that would have normally qualified this privilege. Pompey even arrogated to Sulla that: "More men worship the rising sun than the setting sun". In response, Sulla cut him out of his will but otherwise indulged him because he was equally complicit in the latter's crimes. Pompey typified the mentality of the Late Republican-Proto-Empire: be sharp enough to pick the right side and don't let silly things like norms, morals, laws, rules get in your way. In a blatant breach of the Roman constitution, he became consul at the age of thirty-five without having ever been a senator.

While he was a skilled commander in his own right, Pompey acquired a not entirely undeserved reputation for 'finishing' wars that had already been won by other, less famous Roman generals. More importantly, when confronted with a general who was highly talented and innovative such as Quintus Sertorius, Pompey was actually beaten in battle and forced into retreat, at Saguntum and others. Sertorius had fled to Hispania and organized local tribes and groups and more or less had converted a Roman province into his own Republic. His innovative guerrilla warfare left Pompey confused, and he had to rely on other Sullan generals to take Hispania, town by town. Even then Pompey's victory was only achieved by treachery, when one of Sertorius' generals and friends assassinated him at a banquet (in a manner quite like how Caesar died). The guy who killed Sertorius, Perpenna Vento, then surrendered to Pompey by offering a list of his old boss' contacts and client lists. Pompey accepted the surrender, read the lists, burnt it (but we can assume that he memorized a few or all of the names), killed Vento, and claimed victory over Sertorius. Pompey had a history of using assassinations to get what he wanted. When the populare Brutus Elder (father of Marcus Junius Brutus) held out against Pompey's faction, Pompey negotiated a surrender, and then sent an assassin to kill him the next day. Decades later, Brutus Junior would fight alongside Pompey against Caesar.

On his way back to Rome, he ran into the surviving followers of the already dead Spartacus, who had apparently opened a channel of communication with Sertorius. Pompey's veteran soldiers easily defeated these remnants, and Pompey promptly claimed glory for having defeated the entire slave revolt, much to the anger of Marcus Crassus who actually did defeat Spartacus.

Regardless of his methods, and how much credit he did or did not steal, Pompey was incredibly popular in Rome and certainly quite a gifted general, at least against weaker armies and smaller threats.note After gaining a few easy victories in the Eastern Mediterranean, the region where Pompey had made his reputation as a great general, Caesar would later snark that some generals were fortunate to make their names against such fragile opponents He earned, or gave himself, the title Magnus after a highly successful campaign against the pirates that plagued the Mediterranean and a war in the Near East that (amongst other things) firmly brought Judea under Roman domination. Of course there was much propaganda in this. The way Pompey dealt with the pirates was to suppress some of them, and to generously offer pardons to the rest, resettling them and making them give up a life of crime, which most of them unsurprisingly accepted (as confirmed in an episode of Virgil's Georgics). In this matter at least, Pompey was more merciful than Caesar. The title alluded to his stated intentions of being seen as Alexander the Great's Roman Spiritual Successor owing to his great success in his early youth, as well as conquering "the East". He took his fetish for Alexander to the extend of imitating him, such as claiming to wear a cape that Alexander supposedly wore, building towns in the East called Pompeiopolis and Magnopolis, with supporters calling him a God and indeed even having a Mystery Cult worshipping him as a God in Delos. As a wealthy general, Pompey also invested in architecture, roads, theatre and sculpture. In many statues, Pompey was presented as holding a globe in his hands. Indeed, the historian Mary Beard has called Pompey "the first Roman Emperor" in that he more or less codified the imperial Cult of Personality, that Caesar and other Emperors after him followed. In the East, Pompey also had coins minted with his likeness, something that nobody before had done in the Republican era, and which Caesar imitated when he, as dictator, minted coins in Rome with his own likeness. After all if Pompey could, why not Caesar.

Such megalomania at such a young age, ultimately set the stage for what we would now recognize as a mid-life crisis. In the 50s BC, he became part of the First Triumvirate, a coalition between him, his rival Marcus Licinus Crassus, and the junior partner, Julius Caesar. The latter was the nephew of Marius and a supporter of the populare faction, while Crassus and Pompey had enriched and profited from Sulla's actions and his conservative cause. The coalition was bound by a desire on the part of the two Sullans to secure their privilege and clout, and extend their influence with the help of Caesar. Caesar for his part had his own agenda, being a relatively poor but brilliant young aristocrat who had been steered away from the normal course of his career thanks to Sulla, but who now wanted to make up for lost time. Between them, the three became unofficial rulers of Rome, dividing the best provinces between them. Caesar and Crassus both wanted and got wars so they could gain plunder and glory, while Pompey, Happily Married to Caesar's teenage daughter Julia, settled down in Rome for an extended honeymoon. Soon, cracks began to appear in the triumvirate. Crassus was spectacularly defeated and killed fighting the Parthians, an invasion he launched to get the honors that Pompey had taken from him. Caesar unexpectedly proved a superb general, conquering the Gauls and winning vast new territories for Rome. Despite being a successful Social Climber and achieving many honors as a general, Pompey lived to see his career overshadowed by the upstart Caesar, who despite being a poor lawyer was proving to be a better general than Pompey ever was. He would probably have split from Caesar anyway but his genuine happy marriage with Julia, that was rare enough that it was much commented on and joked about even in that time, held their alliance. That ended with the death of poor Julia in childbirth. The optimate senators, led by Cato the Younger, had loathed Pompey. They saw his elevation as an unwarranted concession made by Sulla, despite the fact that Pompey had served their cause. But they hated and feared Caesar more and the capital was breaking down in street fights led by gangs of populares and optimates. They needed a sword to stop them, so the optimates turned to the man who trampled and marched on Rome in his youth to come and defend the Republic. Pompey was nominated a consul, illegally, since that was an elected office, but the optimates made an exception to contain the crisis.

Pompey had declared that he had only to stamp his feet, and the whole of Italy would rally to him. However, word soon reached Rome that Caesar had crossed the Rubicon, entered Italy under arms, and was advancing rapidly to the capital. Without sufficient time to raise enough troops capable of beating Caesar's veterans, Pompey retreated east, and began raising a huge army. Caesar pursued Pompey into Greece. Their armies first clashed at Dyrrachium, Greece in 48 BC, where Pompey actually inflicted a serious defeat on Caesar, whose troops retreated in disorder. Assuming this to be a trap, Pompey did not order his men to pursue. Caesar would remark that "today the enemy would have won, had they been led by a winner". In their second battle, at Pharsalus a few weeks later, the younger man proved the better general and Pompey and the other Republicans were routed. Pompey fled to Egypt expecting sanctuary; instead, he was betrayed and murdered by a palace cabal, who sent his head as a gift to Caesarnote The gift was not appreciated; Caesar had the assassins executed.. Nonetheless, Caesar would finally be assassinated in the Senate, with his body falling before a statue erected in honour of Pompey Magnus.