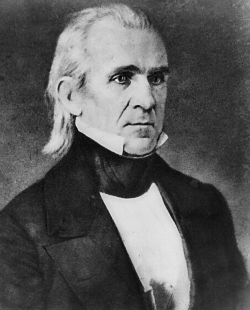 Finished his Bucket List.
"Who the hell is James K. Polk?"
—Whig party slogan during the 1844 election campaign.
"Who the hell are the Whigs?"
—Most high school students.
Advertisement:

Um... They Might Be Giants sang about him? And the school in Ned's Declassified School Survival Guide was named after him, wasn't it? Or was it Married... with Children?note Yes, yes and yes.

James Knox Polk (November 2, 1795 – June 15, 1849) was the eleventh president of the United States, serving from 1845 to 1849, he directly succeeded John Tyler and preceded Zachary Taylor, and was the third from the Democratic Party, and the only one (so far) rocking a mullet.

He was previously in the House of Representatives for fourteen years, and served as Speaker of the House for the last three and a half of them, becoming the only President to have held that position. Was then elected Governor of Tennessee. During his time in the latter role several prominent Democrats tried to recruit him to replace Martin Van Buren's notoriously eccentric and ineffectual vice-president, Richard M. Johnson, but a lack of consensus within the party saw Van Buren decide to just run without an official running mate and figure things out after the 1840 election — which ended up being a moot point when he ended up losing in a landslide to William Henry Harrison. However, Polk's brief flirtation with being Van Buren's running-mate would have bigger results four years later.

The 1844 election saw Polk become the first "dark horse" as both a nominee and a victorious candidate. Van Buren was favorite to be nominated again, but he lacked sufficient support among the party to get the nomination, and so did his main rival, Lewis Cass. Eventually, Polk's name was tossed into the balloting in an effort to get things unstuck; the gambit succeeded spectacularly, and he was swiftly nominated.note Polk truly was the darkest of horses. He had not held any political office for the three previous years, and his last two runs saw him defeated for Governor of Tennessee in 1841 and 1843. The actual election then saw things turned Up to Eleven, as he beat the well-known Henry Clay to victory and became, at 49, the youngest man elected at the time. He won on the promise of completing four goals: the reestablishment of an Independent Treasury System, the reduction of tariffs on imports, acquisition of the disputed Oregon Territory, and acquisition of land on the Pacific coast from Mexico.

As president, he oversaw the largest territorial expansion in American history, adding almost one third of the current continental United States. The process of annexing Texas was completed during his first few months of his time in office (though it was almost entirely done during John Tyler's presidency). Regarding the Oregon Territory, he settled on dividing the territory in half along the 49th Parallel with British Canada rather than risk war with the British Empire. We got what are now the states of Oregon, Washington, and Idaho out of the deal.note The U.S. was generally regarded as getting the better half of the deal, as the Americans got the lower portion of the Columbia River, meaning that the British could not use that river to navigate to the Pacific.

Acquiring land from Mexico proved more problematic. Following troubled diplomatic negotiations and bloody incidents on the border, Polk asked Congress to declare war, and, following a long but rather inevitable road to victory, signed The Treaty of Guadalupe Hidalgo, Mexico's formal surrender. The Mexican-American War (when Polk, as TMBG put it, "seized the whole southwest from Mexico") was fairly controversial at the time. Abolitionists considered it a war being waged for the purposes of expanding slavery into new territories (at the time, not many people knew that Arizona and New Mexico weren't exactly suitable for plantation labor). Given that Polk had not been willing to go to war over Northern Territories (a popular slogan back than was "Fifty four forty or fight - i.e. 54°40'N instead of 49°N as the Northern Boundary of the US), many felt that Polk had a Southern agenda. However, the Army that actually fought the Mexican American War was disproportionately Southern, causing (real or imagined) grievances on both sides that would linger...it didn't help that he also tried to buy Cuba from Spain, as it was also south of the Missouri Compromise Line and had been used as a cane plantation by the Spanish - just the type of economy the slave states relied on. Henry David Thoreau, who refused to pay taxes to support the war, coined the term civil disobedience at this time.note In particular, he came under fire from a first-term Whig Congressman from Illinois named Abraham Lincoln. Lincoln criticized Polk for his thinly-veiled expansionism, but he came to regret this later when his attacks on presidential wartime powers came back to bite him in the ass.

In addition to being the man to make The United States into a two coast nation, Polk also oversaw the opening of the U.S. Naval Academy and the Smithsonian Institution, the creation of the Department of the Interior, the groundbreaking for the Washington Monument, and the issuance of the first postage stamps in the United States. Texas, Iowa, and Wisconsin were also added to the Union under his watch.

Polk had an enviable record for setting and (gasp!) accomplishing his agenda. He suffered from a chronic inability to delegate authority, and obsessively micromanaged absolutely everything. This is (probably) a large part of why he only served one term and died a few months thereafter. He is widely considered to be an underrated president by many historians and is sometimes called "Our greatest one-term president." Many consider him to be one of the finest American presidents for the simple reason that he achieved everything he wanted to do in his single term. Along with some complicated health problems towards the end of his term, this is why he decided to not run for reelection.note That, and he had already pledged to do so anyway as a means of appeasing the bigshot Democrats he beat for the nomination in 1844. After leaving the White House he went on a tour of the South, which killed him, as he caught cholera along the way. He died only 103 days after Zachary Taylor, his successor, was inaugurated President. At age 53, he had the shortest natural lifespan of any President as well as the shortest post-presidency of those who did not die in office.

In spite of his accomplishments, Polk is not very well-known by the general American public today, and the events he had a direct hand in as president are, more frequently than not, discussed without mentioning him. He has a (not undeserved) reputation as America's 'least known consequential president.'