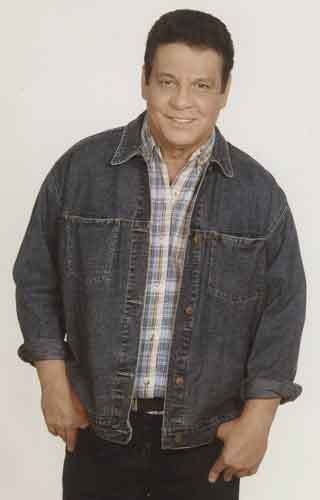 FPJ's career began in 1955 after the passing of his father, Fernando Poe, Sr. from rabies during production of ones of his movies, while the younger Poe was in junior high. Dropping out of school, he got his first acting role in Anak ng Palaris (Child of Palaris), before becoming a star in the long-running youth comedy series Lo' Waist Gang. The series was a massive success, having kickstarted the popularity of the titular pants. However it was 1961's Markado (Marked) a Swashbuckler adventure that crowned him as "Da King", as it was his first venture as an independent producer with his own studio, FPJ Productions. He spent the rest of the 60s in a series of urban dramas in the vein of A Streetcar Named Desire and more notably, a string of Filipino westerns, along with a few war movies, some of which were made with American companies. In 1968, Da King found his Queen when he married The Queen of Filipino Cinema, Susan Roces, in a ceremony with then-President Ferdinand Marcos and his wife, Imelda, serving as sponsors.note Not unheard of in the Philippines, Marcos' predecessor Ramon Magsaysay did the same for a few film stars in the 50s. FPJ and Susan would remain Happily Married for the next 36 years, despite FPJ having more than one affair with a few of his female costars. FPJ would have three children with either Susan or his mistresses in this time, though he'd also adopt a daughter, Grace Poe, who would cameo in a few of his movies and successfully run for office as a senator.

The 70s served as a transitional period for FPJ. He did a few more westerns before transitioning to his bread-and-butter action movies which lasted well into the 80s, 90s, and 2000s. (He would supplement these with the occasional Screwball Comedy.) However it was his four-part 80s Fantasy Series Ang Panday (The Blacksmith) which some consider to be his greatest work. The four films swept the box office at every Metro Manila Film Festival they were shown in, winning a Best Picture Award every time along with a slew of awards.

Despite his lofty title and place in Filipino cinema as its unbeatable box-office top draw, FPJ was also well-noted for being an all-round Nice Guy and Humble Hero in Real Life, which only endeared him more to the masses. Stories of his endless generosity include him paying the bills for one of his colleagues who'd fallen on hard times, providing catering for his film crews (breaking a tradition in Filipino filmmaking and setting a new precedent), and anonymously donating massive amounts of relief goods to disaster victims, sometimes arriving way ahead of the government's own relief efforts.

Acting chops aside, FPJ also directed and produced many of his own movies under the Pen Names D'Lanor and Ronwaldo Reyesnote "Reyes" being his mother's maiden name. A well-known story is that when his one of his own movies won an award at the FAMAS Awards (the Filipino answer to the Oscars), nobody could claim to have met or seen "Ronwaldo Reyes" until FPJ himself went on stage and said that he was in fact Ronwaldo Reyes.

In 2004, after a 49-year career on the silver screen, FPJ attempted to run for the presidency against the incumbent Gloria Macapagal-Arroyo, despite a lack of political experience. After a close electoral race, FPJ lost the election by a narrow margin. FPJ himself would sadly pass away on December 14th of that year following a stroke. Many close friends believed that the shock of losing the election despite his popular support with the masses was the cause of his passing. As an even bigger Kick the Dog moment, it was revealed a few years later that Macapagal-Arroyo had in fact rigged the vote to her favor in certain provinces, thus delegitimizing her own victory.

FPJ received a true sendoff fit for a king after a nine-day wake on December 22, with estimates for mourners going as high as two million. Such numbers for a local public figure's funeral hadn't been seen since the funeral of Ninoy Aquino, Jr. in 1983 and the passing of FPJ's friend and frequent co-star Julie Vega in 1985.

Despite his passing, FPJ's legacy remains strong in his home country to this day. Reruns of his movies draw well in the TV ratings, his two daughters are well-involved in local politics, a golden statue of him was erected in Manila, and as an ultimate tribute, his 1997 blockbuster Ang Probinsyano was adapted into a a TV series with the full blessing and involvement of his estate.

For his Japanese equivalent, see Yujiro Ishihara. For his Hong Kong equivalent, look to Chow Yun-fat.

Some of his major films include, but are no means limited to:

Tropes that apply to his works are: