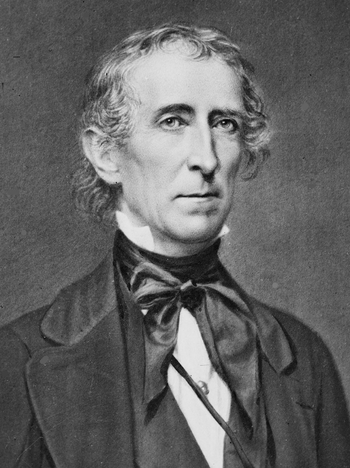 Doesn't it disturb anyone that your Vice President has a vested interest in your death?
John Tyler: Doctor, I am going.
Tyler's doctor: I hope not, sir.
John Tyler: Perhaps it is best.
— John Tyler's last words
Advertisement:

John Tyler (March 29, 1790 – January 18, 1862) was the tenth President of the United States, the second from the Whig Party, and the first Vice President to inherit the Presidency. He served from 1841 to 1845, preceding James K. Polk and succeeded William Henry Harrison, who died of pneumonia, just a month into his presidency.

Upon succeeding office, Tyler was nicknamed "His Accidency" by his detractors. He was a longtime Democratic-Republican who was elected to the Vice Presidency on the Whig ticket, so he was rather unpopular and had several disagreements with his former political supporters and had a tenuous relationship with his predecessor during his short Vice Presidency. After Harrison was declared dead by the pneumonia, Tyler declared that he was now the President rather than the Acting President. But as President, Tyler ended up making a lot of Whigs very angry by vetoing several of their bills brought to the White House, including a Third National Bank. As a consequence, most of his Cabinet resigned (not counting his State Secretary Daniel Webster) and the enraged Whigs expelled Tyler from the party because he could not cooperate with them and disagreed with a lot of their agenda, making him the only U.S. President to oppose his own political party and be officially expelled from his own political party while still in office. This also led to him being the first president ever to have an impeachment attempt directed against him (the only other president being President Richard Nixon, who resigned in 1974 to avoid being impeached over his role in the Watergate Scandal) — on the somewhat thin reasoning that actually using his veto counted as an abuse of power, even though over half of the previous presidents had vetoed at least one billnote specifically, five out of nine used it — John Adams, Thomas Jefferson and John Quincy Adams could have but never did, and Harrison never even had the chance to approve or veto any bills, due to Congress not being in session during his four weeks in office, and Andrew Jackson had vetoed more by the same point of his presidency — but the initial vote failed 83-127, so Tyler remained in office. As a matter of fact, the first presidential veto to be overridden by Congress was one of his. Tyler’s most notable and controversial policy is the annexation of Texas. Despite the fact that he remained at odds with the Whigs, he also has some foreign success; he signed the Webster-Ashburton Treaty with the United Kingdom (which resolved border issues between the U.S. and British Canada in the northeast, between Maine and New Brunswick), the Treaty of Wanghia with China (which gave America the same trade rights that the European powers were starting to get in China), and added Florida to the Union on the last full day of his presidency. Although a graceful gentleman, he was also a very stubborn man who was not very easy to get along with at times, even his allies and rivals, and his argumentative and arrogant personality ruined his bid to be the Whig nominee for the 1844 election, thanks to his unpopular vetos. When the South seceded during the Civil War, Tyler was elected to the Confederate House of Representatives but died before taking office. He was the only former president to die as a traitor to the United States he once served. He was buried with his coffin draped in the Confederate flag, making him the only president buried under a different "foreign" flag,note It's unclear if the Confederate States count as a "foreign country" since no foreign government ever recognized it as an independent country, although Great Britain and France granted it belligerent status. and the only one whose death was not officially recognised in Washington.

He fathered eight children with his first wife, who died while he was in office, and remarried while he was president, making him the first President to get married during his Presidency, fathering seven more children with his second wife (whom he married after her father was killed in front of both of them by an exploding experimental cannon and she fainted into his arms). The second Mrs. Tyler asked to be addressed as "the Presidentress" which didn't catch on. In addition to those fifteen legitimate children, there are rumors of him having an illegitimate child. According to The Other Wiki, one of his grandsons (born in 1928) is still alive - his father, Lyon Gardiner Tyler, was born in 1853 when Tyler was 63 years old — meaning that this grandson was born when Lyon was 74 or 75 years old). Another grandson, born in 1925, died on September 26, 2020.

Rasmussen Reports, an American polling agency, polled citizens on what they thought of each President in 2007, and 76% could not give an opinion on him. If this is any evidence, he's probably one of the most forgotten and controversial American Presidents. He is not helped in this sense by having a relatively bland name, unlike, for example, Millard Fillmore.