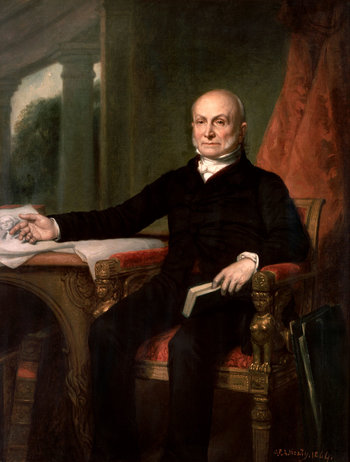 "May our country always be successful, but whether successful or otherwise, always right."
"I am a man of reserved, cold, austere and forbidding manners. My political adversaries say a gloomy misanthrope, my personal enemies, an unsocial savage."
—Adams' opinion on himself, long before he became president.
Advertisement:

John Quincy Adams (July 11, 1767 – February 23, 1848) was the sixth U.S. President in 1825 to 1829. A Democratic-Republican, he served between James Monroe and Andrew Jackson. He was the first son of a former President to enter the White House, and only George W. Bush has done so since.

Before becoming president, Adams served as a prominent statesman, having gained experience when he went with his father to Europe during the Revolutionary War. He served as a respected ambassador to several countries in Europe, and later helped negotiate the treaty that ended the War of 1812. As James Monroe's Secretary of State, Adams authored most of the Monroe Doctrine, bought Florida from the Spanish, and helped negotiate the border of the United States and British Canada (gaining America parts of present-day Minnesota, North Dakota, and South Dakota in the process). He is widely considered to be one of the most successful statesmen and diplomats in American history. Adams was also a professor at Harvard for some time.

After Monroe's second term election, Adams was one of four men to run for the presidency in 1824. Andrew Jackson was one of the other four, and he won a plurality of both the popular vote and the Electoral College, but not enough to win the election. As the Constitution dictates, the decision then went to the House of Representatives. Speaker of the House Henry Clay, who was the fourth-placed nominee and Jackson's sworn nemesis, swung the election in Adams' favor by convincing enough representatives to vote for him. Upon entering office, a grateful Adams nominated Clay to be his Secretary of State. The Jacksonians in Congress were outraged, and for the next four years they complained of the "Corrupt Bargain" which stole the election, but neither Adams nor Clay were corrupt. Clay believed that Jackson was unfit for the presidency, shared many policy positions with Adams (or at least fairly similar ones to his), and the third-placed nominee, William Crawford, had just suffered a severe stroke that left him severely physically handicapped. Adams also made a good choice when he nominated Clay, since he was one of the most qualified politicians in the country. Still, this did start things on the wrong foot, and it proved that, like his father before him, Adams was often oblivious to how politics work in practice. Jackson vowed to do whatever it took to win the presidency in 1828.

Refusing to mix religion into American politics, Adams took the oath of office with one hand on the Constitution and another on a law book. Despite his diplomatic and political skills, he achieved very little during his time in office. When he entered the White House, Adams proposed to Congress an ambitious series of "internal improvements" sponsored by the federal government, including more roads and canals, stronger industries, national parks, federal support for the arts and sciences, and a national university. Jackson's allies in Congress tried to deadlock every single one of these suggestions, and only some of the roads and canals were passed. When they weren't blocking his legislation, opponents ridiculed Adams as an out-of-touch Cloud Cuckoo Lander for his obsession with science. His referring to proposed observatories as "lighthouses of the sky" was rendered by Jacksonian papers as "lighthouses in the sky," as if Adams suggested building floating observatories with taxpayer money.note Which, to the 21st Century reader, holds an ironic resonance, making Adams sound like the great-grandfather of NASA. Additionally, Adams had already solved most major foreign policy issues before he became President, so not much really happened on that front besides some trade agreements with countries in Europe and Latin America. In an ironic echo of the situation his father faced, his Vice President, John C. Calhoun, was a political enemy who had been on Jackson's side during the election. Still, Adams did manage to pay off almost two thirds of the national debt in just four years - mostly, though, because the Jacksonians would not let him spend money on anything and paying off the debt was the only option. His successor, Jackson, paid off the rest during his time in office. The Jacksonians kept portraying Adams as a corrupt aristocrat and Jackson as an honest hero of the common man, and Adams, who had a very poor ability to communicate with people and honestly was pretty stubborn, could do little to convince people otherwise. The criticisms and insults thrown at Adams are absolutely insane, way worse than even the worst mudslinging in today's politics. To the surprise of absolutely no one, Adams was utterly crushed when Jackson went up against him again in the election of 1828.

He was one of the most active ex-Presidents, though, and probably did more as an ex-President than he did while he was in the White House. After leaving office, Adams ran for and won a seat in the House of Representatives from a Massachusetts district, thus becoming one of only two American presidents to hold political office after serving in the White House (the other being Andrew Johnson, who briefly returned to the Senate before he died). As a Congressman he was much more successful and popular, earning the nickname "Old Man Eloquent" for his speeches against slaverynote  In particular, JQA spent nine years from 1835 to 1844 fighting against a "gag rule" against the discussion of slavery in the House of Representatives: the rule stated that any petitions broaching the subject or attempts to raise debate were deemed out of order and to be tabled. Adams argued that this was a flagrant violation of not only natural law, but also the very ideals of the republic that his father had played a critical role in shaping. and the Mexican-American War. Even in his old age, he was a great lawyer and a shrewd negotiator, his most famous case being when he successfully argued at the US Supreme Court that the Amistad Africans were illegally enslaved and had every right to fight for their freedom. One of the most vocal opponents of slavery in America, Adams correctly predicted that slavery would eventually cause the Southern states to secede and start a bloody war between the two halves of the nation and that, during this war, the president would use his war powers to abolish slavery. On the other hand, he was fairly racist in privatenote  It's one of those murky Fair for Its Day things, unfortunately: on one hand, he absolutely had a tendency to say things that would be considered unspeakably racist today. However, William Lee Miller's book Arguing about Slavery included excerpts from JQA's personal diaries that featured quite-honestly poetic writings on the concept of whether black people were to be considered equal under the law (spoiler: he did.) , as evinced by several comments he made about the Maligned Mixed Marriage in Othello: "a runaway match with a blackamoor!" On February 21, 1848, he suffered a stroke on the House floor during a passionate debate, and he died two days later at the age of 80.

He was a Bunny-Ears Lawyer, and is rivaled only by Lyndon Johnson when it comes to the title of "Weirdest American President". Allegedly he enjoyed skinny-dipping in the Potomac in the early morning during his presidencynote However, the story that a female journalist, usually named as Anne Royall

, once stole Adams' clothes while swimming to entrap him into an interview is likely a myth and pimped for the Russian Czar (at least that's what the Jacksonians believe). He was also ugly as sin and is considered the scariest-looking president ever. He was also the earliest president to be photographed, albeit not until several years after he left office; here

◊ is the photo that was taken of him, shot in 1843. William Henry Harrison would be the first president to be photographed while in office.