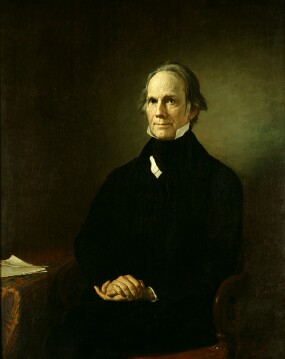 "My friends are not worth the powder and shot it would take to kill them!"
"I would rather be right than president."
—Henry Clay

Henry Clay Sr. (April 12, 1777 – June 29, 1852) was a Kentucky Congressman and one of the most important politicians in American history who was never elected president (though he ran for it several times). Switching between the House and the Senate multiple times throughout his prominent and lengthy career, Clay served three terms as the Speaker of the House (1811–1814, 1815–1820, and 1823–1825). Born to a large family in a Virginia homestead, Clay was educated as a lawyer and moved to Kentucky when he was twenty. Before he was first elected directly to Congress, he was twice elected to complete the terms of two resigning Senators, first in 1806 and again in 1810 (he was actually only twenty-nine the first time). First elected to the House of Representatives in 1811, Clay was chosen as the Speaker of the House during his first day on the job. He was one of the most prominent "war hawks" who pushed the United States into declaring war on Great Britain in 1812. Ironically, President James Madison would send Clay to help negotiate the Treaty of Ghent ending the war. Clay's skills as a politician and force as an orator made the office of Speaker of the House, one of the most important positions in the federal government, comparable even to that of the presidency itself.

After the end of the war, Clay became the most vocal supporter of what he named the "American System", a domestic policy that supported a strong federal government and had three primary points: firstly, the founding of a National Bank that would promote a single national currencynote While the currency was always United States Dollars, it was in two forms: Coinage produced by the United States Mint, and paper notes issued by banks. In theory, banknotes could be exchanged anywhere for hard currency, but with so many banks (both private and state-owned) creating their own notes, there was constant fluctuation of the amount of money in circulation, and there were effectively two classes of money, with currency more trusted than paper; secondly, the use of high tariffs to protect and foster growth in American businesses as well as collect money for the federal government; lastly, the use of the tariff's revenue to build well-maintained national infrastructure, such as national roads and canals, that would help improve domestic life. Notable results of the American System include the Cumberland Road, which is currently U.S. Route 40, and the Ohio & Erie Canal, which connected Lake Erie to the Ohio River. A supporter of the Latin American independence movements from 1817 to 1823, Clay helped push the United States to establish diplomatic relations with these nations. He was also a founding member of the American Colonization Society in 1816, which, in order to create a haven for freed American ex-slaves, founded colonies on the west African coast that would eventually unite to form the nation of Liberia. He would later serve as the organization's president from 1836 to 1849. Clay was actually a slaveholder for much of his life, though he freed all of his slaves in his will.

He ran for president three times, each time under a different party; as a Democratic-Republican in 1824, as a National Republican in 1832, and as a Whig in 1844. In his first serious run for presidency in 1824, there was a tie between John Quincy Adams and Andrew Jackson, and Clay was in fourth place (The third place guy even had a stroke). This meant that the vote for the presidency would be decided by the House. He was personally terrified of Jackson becoming the president, believing that Jackson wasn't qualified to hold the office. Clay, still Speaker of the House, announced his support for Adams and convinced enough Representatives to vote for Adams over Clay. A grateful Adams then nominated Clay as his Secretary of State – which was an even more important position back then, since the three previous Presidents all served in that position, and the Department of State was responsible for a large number of internal functions as well (these functions would be transferred to the Department of the Interior in 1849), and the Secretary of State was at time analogized to a Prime Minister. Known as the "Corrupt Bargain," this incident made the public perceive Adams as corrupt and outraged Jackson's supporters in Congress, and Jackson easily won the next presidential election largely as a result.

In 1833, he formed the Whig Party in opposition to Jackson and his Democrat supporters. Although the Whig Party would dissolve just over twenty years later, it is essentially the forerunner of what is now the Republican Party, which was founded largely by former Whig supporters. Upon leaving office in 1837, Jackson apparently said that one of his only two regrets as president was not shooting Henry Clay.†  His other only regret was that he didn't hang John C. Calhoun. Who, for the record, was Jackson's Vice President. Considering that Calhoun was an advocate of states' rights and a nullificationist (the precursor to secessionism), this is entirely justified.

Ironically, Clay's best chance of becoming president probably came in 1840. After he lost to William Henry Harrison for the Whig nomination, he declined a chance to serve as Harrison's running mate. Harrison, of course, died thirty days into his term and elevated John Tyler to the President. Clay, who clashed with Tyler to the point that the latter was written out of the Whig Party, spent the rest of his life regretting this missed opportunity.

Clay is considered to be one of the "Great Triumvirate" of the American Senate, along with South Carolina's John C. Calhoun and Massachusetts' Daniel Webster. The three were among the most important voices in Congress from the early 1830s until 1850. Their primary legacy was negotiating the Compromise of 1850, which (at least temporarily) preserved the Union. Clay had also helped negotiate and pass the Missouri Compromise through Congress in 1820 to largely the same effect. He also prevented South Carolina from seceding during the Nullification Crisis of the early 1830s. Ironically, the state threatened to secede due to a tariff bill that Clay supported. For steering the nation off the path of war multiple times, he is known as the "Great Pacificator." One Southern Senator, Henry S. Foote, once said that "Had there been one such man in the Congress of the United States as Henry Clay in 1860–'61, there would, I feel sure, have been no civil war." Later in his life, Clay vocally opposed "manifest destiny" and admitting Texas to the Union, believing that it would cause war with Mexico and strongly divide the nation over slavery. Clay was still serving as a Senator when he died. He was the first person to lie in state in the Capitol Building for his funeral.

Abraham Lincoln, who was initially a member of the Whig Party before switching to the Republican Party in the 1850s, was a huge fan of the guy and his policies, calling him "my ideal of a great man." He was known to quote Clay in his speeches from time to time.