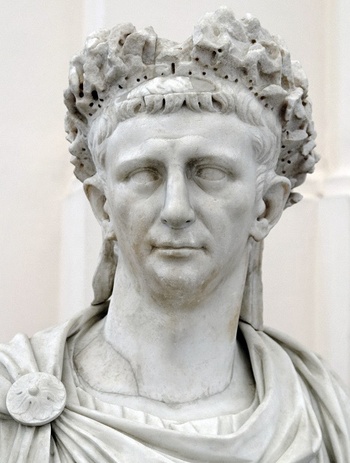 Claudius Caesar Augustus Germanicus was the fourth emperor of Rome and of the Julio-Claudian dynasty. He was Caligula's uncle and Tiberius' nephew as well as the grand-nephew of Augustus through his sister Octavia. Although Claudius suffered from illness, he is generally considered to have been an excellent emperor providing stable rule and expanding the empire with the conquest of Britain. While ancient writers dismissed him as an idiot, modern reappraisals have tended towards the positive.

Claudius was born in 10 B.C at Lugdunum,Gaul to Nero Claudius Drusus and Antonia, one of Mark Anthony's daughters with Octavia. As a child he suffered from a sickness that left him with a severe stammer and weak knees. His mother once described him as “a monster of a man, not finished but merely begun by Nature". The full extent of his illness has been debated but he proved to have a keen intellect despite his handicaps, studying under the historian Livy and the philosopher Athenodorus. Augustus was impressed by his oratory.

Before becoming Emperor, he wrote several histories, one of which was censored by the Imperial Family for being too truthful. He was also fluent in Etruscan—one of the last if not the last person to have full command of that ancient language—and wrote a comprehensive Latin-Etruscan dictionary...which is now lost. (Cue the wails of modern historians, archaeologists, and linguists, who are stuck making educated guesses to interpret Etruscan texts.)

His candidness as a historian is believed to have undermined his prospects of public office, as Claudius spent Tiberius' reign in private scholarly pursuits. Claudius managed to evade both the treason trials of Tiberius (in spite of being married to a relative of Sejanus) and latter the tumultuous reign of Caligula,by exaggerating his ailments and playing the fool to survive. Caligula took a gleeful delight in tormenting his uncle: playing cruel practical jokes, forcing him to pay ridiculous sums of money and humiliating him in public. In the wake of Caligula's assassination, he was found hiding behind the curtains in the Imperial Palace by the Praetorian Guard and acclaimed Emperor.

Claudius proved a shrewd Emperor, restoring stability and peace to the Empire. He embarked on a series of infrastructure projects and expanded the Imperial bureaucracy. He would place a considerable amount of trust in his freedman Narcissus and Pallas, giving them significant authority. Claudius also displayed a keen interest in the judicial system, hearing many cases himself.

Claudius was the first emperor since Augustus to expand the boundaries of the Roman Empire. He officially annexed a number of provinces, but the conquest of Britannia was his most notable achievement. In the year 43 A.D he sent Aulus Plautius with four legions to the isle, ostensible to help a tribal ally before expanding their efforts. Claudius would arrive with additional forces, including war elephants, to complete the establishment of Brittania as a Roman province. He would only spend sixteen days on British soil before returning to Gaul. He refused the horrific "Britannicus", instead giving it to his son. When Aulus Plautius returned to Rome, Claudius notably walked beside him in his procession through the city.

Claudius was very much The Casanova and was married four times throughout his life. His first wife Plautia Urgulanilla was divorced because she was rumored to have killed her sister-in-law. His second wife was Aelia Paetina, a relative of Tiberius's Praetorian prefect Sejanus and was divorced after Sejanus' downfall. Claudius' third wife was Valeria Messalina who became infamous for her sexual affairs and is claimed to have competed with a prostitute. Ultimately her downfall came when she married Gaius Silius in a plot to overthrow him, resulting in the execution of Messalina, Silius, and her other lovers.

His final wife (and niece) Agrippina would successfully poison him in 54. Claudius was succeeded by her son who he had adopted Nero.

Robert Graves was largely responsible for prompting a reevaluation of his life, thanks to the popularity of I, Claudius and its television adaptation.