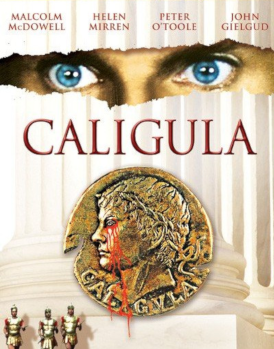 It all began with Gore Vidal writing a screenplay about the life of the infamous Roman Emperor Caligula, based on an unproduced television mini-series by Roberto Rossellini. Though Vidal and Franco Rossellini (Roberto's nephew) originally only intended for it to be a modestly-budgeted historical drama, they were unable to attain funding for it and sought help from none other than the founder of Penthouse magazine, Bob Guccione. And it's actually not his first film, either; Guccione previously produced Chinatown. Yes, really.

Guccione agreed to finance Caligula on two conditions: 1) that it would be tarted up into a lavish, flamboyant spectacle akin to the Sword and Sandal epics of the 50s; and 2) that sex would be incorporated to promote the magazine. During the rewrites, Vidal's screenplay was rewritten to tone down the homosexual content, at Guccione's insistence.

Federico Fellini's art director Danilo Donati was hired to build the expensive and complex sets and costumes. Renowned acting talent, including Malcolm McDowell, Helen Mirren, Peter O'Toole and Sir John Gielgud, was cast. Maria Schneider was originally cast as Caligula's doomed sister Drusilla, but later dropped out and was replaced by Teresa Ann Savoy. After Guccione was unable to come to an agreement with more established directors John Huston and Lina Wertmuller, Tinto Brass, a relatively young Italian director who directed an artsy big budget progenitor to the Nazisploitation genre called Salon Kitty that Guccione had taken a shine to was made the head instead. Shooting commenced in September 1976 in Dear Studios, Rome with plans for a 1977 release.

From the start, Caligula was plagued by difficulties. According to Guccione in a 1980 Penthouse magazine interview, Vidal (whom Guccione called a "prodigious talent") started trouble with a Time magazine interview in which he called directors parasites living off writers, and that the director need only follow the directions as provided by the author of the screenplay. According to Guccione, an enraged Brass responded to Vidal's comments by throwing Vidal out of the studio. Guccione was forced to side with Brass (whom he called "a megalomaniac") because "Gore's work was basically done and Tinto's work was about to begin."

Casting and logistical issues were problems. Uncomfortable with the sex and nudity in the script, the female lead Schneider quickly resigned from the film, to be replaced with Teresa as said earlier. It was soon apparent to the filmmakers that the aggressive shooting schedule developed by the inexperienced Rossellini and Guccione was unrealistic for a film of such scope. Donati had to scrap some of his more elaborate original ideas for the sets and replace them with such surreal imagery as bizarre matte paintings, blacked-out areas, silk backdrops and curtains. This resulted in significant script changes, with Brass and the actors improvising scenes written to take place in entirely different locations, and sometimes shooting entirely new scenes (such as the frolicking scene that opens the film) in order to show progress while the incomplete or redone sets were unavailable. The production was plagued by delays due to disagreements between Brass and Donati over Brass not using Donati's completed sets, as well as Brass and Guccione disagreeing over the sexual content of the film. McDowell and Brass' rewrites of the script changed the tone from a more factually based historical drama to a more surreal Black Comedy satire based on the premise that "absolute power corrupts absolutely"; Brass depicted Caligula as a man who becomes a tyrant after gaining absolute power, then after realizing what he had become, uses his political power to disrupt the political elite to the benefit of the poor citizens of Rome, leading the wealthy Romans to assassinate him.

By the time the principal photography on Caligula had completed, Vidal (having a previous issue with his involvement in the infamous Myra Breckinridge) was concerned about being associated with such an out-of-control production, but also disliking the political satire Brass and McDowell had inserted into the story, Vidal distanced himself from the project. Of Vidal, Brass concluded, "If I ever really get mad at Gore Vidal, I'll publish his script." (An early draft is included as an extra on the Imperial Edition DVD release.)

As the film entered post-production, Guccione took control of the film footage, fired Brass for running up huge costs (Guccione claims Brass shot enough film to "make the original version of Ben-Hur about 50 times over"), casting anarchists and criminals as Roman senators, and using what Guccione considered "fat, ugly, and wrinkled old women" in the sex scenes instead of his Penthouse Pets. (In actuality, the women weren't "ugly" or "old" at all, just not as beautiful as Guccione's models.) Guccione hired friend Giancarlo Lui to reedit the film. Lui was instructed to refashion the film into something more in keeping with what Vidal had first scripted, while delivering the sexual content demanded by Guccione; they shot and added hardcore scenes. Guccione's recut also removed Brass' satire and much of the humor (and context which would have indicated that the film was meant to be funny), simply painting Caligula as a man mad with power without Brass' subtext, turning the film into an erotic drama.

With much footage improvised and rewritten from the original draft of the film, Lui further scrambled, re-cut, and deleted scenes altogether. Many of the softcore sex scenes shot by Brass were removed, replaced by approximately six minutes of hardcore sex shot by Guccione and Lui. In the end, the final cut of the film had strayed far afield from what either Vidal or Brass had intended.

In the unpleasant aftermath, both Brass and Vidal launched independent tirades against the film and lawsuits against Guccione, delaying the release of Caligula. Vidal, who was paid $200,000 for his script, agreed to drop his contractual claim for 10% of the film profits in exchange for having his name removed from the title of the film (original billing was to have been Gore Vidal's Caligula). In 1981, Anneka Di Lorenzo, who played Messalina, sued Guccione for sexual harassment and damage to her career, claiming that he pressured her to have sex with his business associates and used hardcore sexual scenes in the final cut of Caligula without her knowledge, thereby associating her with a pornographic film. After a protracted litigation, in 1990 a New York state court awarded her $60,000 in compensatory damages and $4,000,000 in punitive damages. On appeal, the punitive damages were determined to be not recoverable and the court vacated the award. Anneka Di Lorenzo retired from filmmaking shortly after the release of Caligula and died under mysterious circumstances in 2011.

In late 1979, three years after production began, Caligula made its debut. While critics panned it, it was a commercial success, due to the fact that Guccione released it in a limited amount of theaters in theatrical space Guccione himself paid for (because many theaters had legal concerns over the X-rated content and refused to screen it) and charged more than tickets usually cost at the time (for example, $10 as opposed to $3). That, combined with increased interest due to the controversy resulted in the film turning a profit, even with its large budget and Guccione paying for theaters to screen it.

There exist many, many, many different cuts of the film, all varying in length and legality; R-rated versions run around 98-105 minutes, while the "uncut" version with Guccione's hardcore footage has a runtime of 156 minutes.

The movie's sets, costumes, and some actors were reused by Rossellini in his film Messalina, Messalina, a slapstick comedy telling the story of Messalina's marriage to Claudius, conspiracy against him, and death on his orders. Because of the legal troubles with Caligula, it was technically released first, even though it was filmed and takes place after.