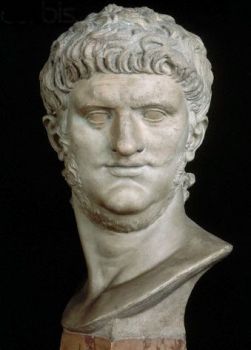 Nero (born Lucius Domitius Ahenobarbus, 15 December 37 – 9 June 68 AD) was a notorious Roman Emperor and among Augustus, Caligula, Hadrian, Marcus Aurelius, and Constantine the Great is one of the most famous. Note that much of his infamy - similarly to Tiberius and Domitian - is handed down to us by how much the elite of ancient times hated him. In particular, the fact Nero loved to strum his lyre, host grand parties, and pined to become a gladiator was altogether against the morals of the kind of people who recorded history at the time. Further to this, he became one of Christianity's earliest and most infamous villains. It's worth bearing in mind when reading about how apparently despicable he was.

He was adopted by Emperor Claudius on behalf of his new wife Agrippina The Younger, who was Nero's mother (and Caligula's sister). In 54 AD Claudius was poisoned by Agrippina, making Nero his successor. As emperor, Nero immediately made sure nobody stood in his way. He poisoned his adoptive and step brother Britannicus in 55 AD, ordered the execution of his first wife Claudia Octavia and in 59 AD even the woman who placed him on his throne: mother Agrippina. In 65, he beat his second wife Poppaea to death while she was pregnant with their child.

Nero's early reign was decent, but after five years he started to become more preoccupied with leading a decadent life. He drank and ate a lot and immersed himself in perverted sexual behaviour, both with men and women. The emperor fancied himself a wonderful poet, singer and lyricist, so much even that he supposedly played the lyre during the Great Fire of Rome in 64 AD and even lit the city on fire personally.note Nowadays, history presumes that both fires (yes, there were two Great Fires of Rome) were caused by bad city design and some spilled coals in a tenement section of the city. After the disaster Nero ordered the construction of a large palace, the Domus Aurea ("Golden House") on the destructed area of Rome, with a 40 meter high statue of himself. Nero also persecuted Christians and blamed them for the Great Fire. He had many of them tied up on poles next the road, then covered in tar and set on fire, so they could function as street lighting during parties.

Naturally, all this debauchery and cruelty didn't make him very popular with the citizens. As early as 62 AD a conspiracy was plotted against him, but he found out three years later and had all those involved executed. By 68 AD Rome was in chaos, nearly bankrupt and threatened by foreign invasions. All stuff Nero didn't care about. The Senate intervened, ousted him by coup and ordered his arrest. To avoid this Nero committed suicide, aided by his trusty servant. The 40 meter high statue of himself was renovated into one dedicated to the Sun God.

Nero's death would kick off the Year of the Four Emperors, the first civil war of the Roman Empire in which four Emperors ruled in succession: Galba, who ruled for just one year, Otho and Vitellius, who didn't make it past even one year, and Vespasian, who would rule the empire for a decade, establish the Flavian Dynasty of Roman emperors and is credited with bringing political stability to Rome following the chaotic reigns of his predecessors.

After Nero's death his name lived on in infamy, not least because everyone at the time not in his personal circle absolutely hated him. The aristocratic pagan writers of his day and the subsequent centuries loathed him for his affronts to Roman dignity — particularly his love of acting and the stage, seen as low pursuits — and the Christians who took charge 300 years later identified him with evil on account of his persecutions of the early Christians.note The Roman common people (whose accounts have not survived) were probably less negative at first, but he quickly fell out of their good graces too on account of high taxes, bad management, and stupid moves like building his ridiculously lavish palace after the Great Fire rather than using that wealth to rebuild the city as well as sending a load of sand to Rome instead of wheat. He is still seen as the prime example of a bad and mad emperor, while at the same being perhaps the most famous Roman emperor to the general public (save perhaps Augustus). More recent historians have started to doubt whether Nero's reputation wasn't just the result of some serious badmouthing. By all accounts the guy was cruel, unhinged, and dangerously power-hungry, but several of the stories about him are certainly false.

Trope Namer for While Rome Burns.