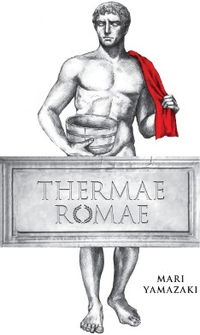 Thermae Romae (Latin for "Roman baths") is the manga and anime story of a 2nd century Roman architect named Lucius Quintus Modestus, who designs baths. He gets transported to 21st century Japan, learns about their bath and toilet technology, and brings these modern ideas back to his time.

The manga, written and drawn by Mari Yamazaki, ran from 2008 to 2013 and ended after reaching six volumes, It is available in English print thanks to Yen

Press. It was adapted to anime in 2012, and was licensed by Discotek Media and released with an English dub. It also got a live-action movie in 2012, which got a sequel in 2014.

In 2020, Netflix announced another animated adaptation of the series, Thermae Romae Novae, for release in 2021.