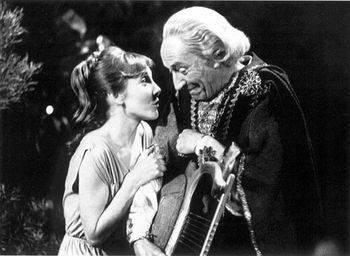 Pictured shortly before escaping While Rome Burns. You can't possible blame the Doctor... right...?
I've got a friend who specialises in trouble. He dives in and usually finds a way.
— Ian
Advertisement:

The one where Vicki nearly kills Nero. Accidentally.

Written by Dennis Spooner. This four-episode serial first aired from January 16 to February 6, 1965.

Fun with the Romans, as the TARDIS crew arrives during the reign of Nero and takes a little holiday at a villa outside Rome. The Doctor quickly gets bored and heads off into the city with Vicki while Ian and Barbara stay behind - only to be kidnapped by slave traders.

Meanwhile, the Doctor is mistaken for a famous musician and ordered to play the lyre for Nero, and goes through ever more ridiculous zany schemes to avoid having to reveal he can't play a note - at one point claiming that only the most musically-attuned ear can even hear his playing, before silently waving his fingers in front of the instrument.

Ian is sold as a galley slave while Barbara ends up as a servant at Nero's palace. Ian escapes when his ship is wrecked and heads to Rome to try and rescue Barbara, but is recaptured and made into a gladiator.

Eventually Ian escapes again and is reunited with Barbara, while the Doctor and Vicki make their escape after the Doctor accidentally sets fire to Nero's plans for the new city of Rome, giving him an idea about how to clear the space