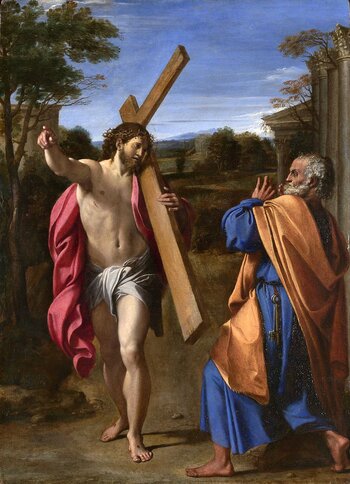 A Historical Fiction novel set in Ancient Rome, Quo Vadis (1896) is internationally the most well-known work of Polish writer Henryk Sienkiewicz, also known for the Sienkiewicz Trilogy. Quo Vadis tells the story of a romance between Marcus Vinicius, a young pagan Roman officer, and Lygia, a Christian barbarian princess raised in a Roman household. The novel is set during the events surrounding the Great Fire of Rome of AD 64, including the Roman persecution of Christians.

The name comes from the Christian legend that recounts that when St. Peter was fleeing Rome as a result of persecution, he saw a vision of Christ and asked Him, Domine, quo vadis? ("Lord, where are you going?") — to which the reply was "I go to be crucified again." Thus realizing that he was abandoning the faithful of Rome to their fates, Peter turned around and was martyred.

Quo Vadis has been adapted to film several times, including in 1951 by Mervin LeRoy (starring Robert Taylor, Deborah Kerr, and Peter Ustinov as Nero, with a young Sophia Loren as an uncredited extra) and in 2001 by Jerzy Kawalerowicz.

The movies also have examples of: