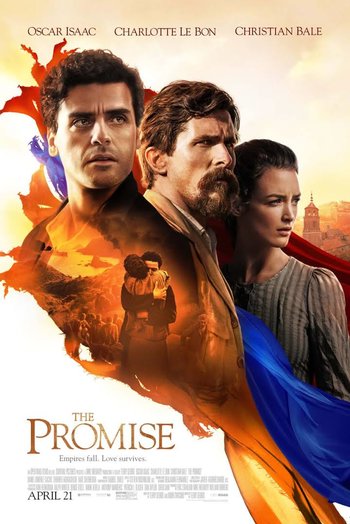 The Promise is a 2016 American historical drama film directed by Terry George and starring Oscar Isaac, Charlotte Le Bon and Christian Bale, set in the final years of the Ottoman Empire. The film premiered on September 11, 2016, at the Toronto International Film Festival and was released in the United States on April 21, 2017, by Open Road Films.

The Promise is about a love triangle that develops between Armenian medical student Mikael (Isaac), an American journalist based in Paris named Chris (Bale) and an Armenian-born woman raised in France, Ana (Le Bon), during the final years of the Ottoman Empire, and during the Armenian Genocide. It was financed by the late Kirk Kerkorian, and is the first major Hollywood film to deal with the topic of the Armenian genocide.

The film follows Mikael, a medical student from the village of Siroun who is put into an arranged engagement in order to use the dowry money to advance his education in Constantinople. While there he becomes enamored with a woman named Ana who is staying with his uncle Vartan, as is American reporter Chris Myers. However, as the Ottoman Empire is pulled into World War I, the Turkish government begins to enact its plan to exterminate the Armenians, who are accused of aiding the invading Russians. Mikael soon finds himself placed in a prison camp, but eventually escapes and tries to return to his village. All the while, Chris Myers attempts to document the carnage and put a stop to it.

Also of note is the song "The Promise" by Chris Cornell, written for this film and Cornell's final musical release before his suicide soon after this film's premier. The song became somewhat of a Breakaway Pop Hit which was nominated for a Grammy Award, ultimately managing to gain more mainstream popularity than the film itself.