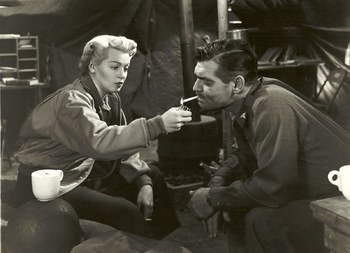 Ulysses "Lee" Johnson (Gable) is a very prosperous surgeon enjoying a cushy upper-class lifestyle with his gorgeous wife Penny (Baxter). His main problem is a certain lack of social consciousness, as pointed out by his far more charitably inclined colleague Dr. Robert Sunday (John Hodiak). Lee doesn't pay much attention to the news or have much of an idea of why the United States found itself at war at the end of 1941, but when it's time to join up he joins up. Eventually Dr. Johnson is assigned to an Army combat medical unit and is sent to Italy. He is assigned as his nurse one Jane "Snapshot" McCall (Turner), a serious woman who is so dedicated to the Allied war effort that she left her six-year-old son in the care of his grandparents when she joined up. As Lee and Snapshot experience the horrors of war in Italy and France, they form a bond, which deepens into love.

Third of four films pairing Gable and Turner. Turner, who was usually clad as a Sweater Girl or in tight dresses for maximum Fanservice, has a Playing Against Type role as a hard-charging nurse dressed in baggy GI uniforms.