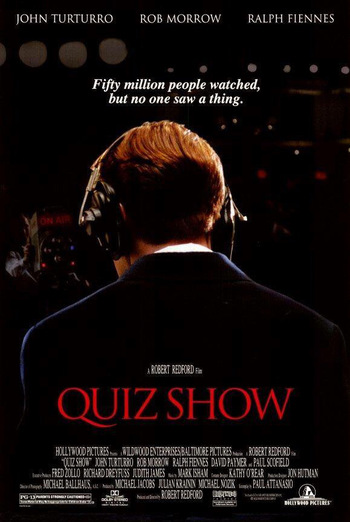 Dick Goodwin: You know, I remember five, six years ago my uncle Harold told my aunt about this affair he had. It was a sort of mildly upsetting event in my family.
Charles Van Doren: "Mildly"?
Goodwin: Well, you have to put it in context. See the thing of it is, the affair was over something like eight years. So I remember asking him, you know, "Why'd you tell her? You got away with it." And I'll never forget what he said: it was the getting away with it part he couldn't live with.
Advertisement:

1994 American film directed by Robert Redford, Based on a True Story about the scandal surrounding the rigging of the Game Show Twenty-One in The '50s.

Herbert Stempel (John Turturro) is the nerdy, trivia-spouting Jew from Queens who has had a long run as Twenty-One's most successful contestant — helped along for an unspecified but significant amount of time by being told the questions and answers in advance. The show's producers, Dan Enright (David Paymer) and Albert Freedman (Hank Azaria), are told by the network, who have been told by the sponsor, that Stempel is no longer a favorite with the viewing public and will have to take a dive... just as Charles Van Doren (Ralph Fiennes), the handsome, impressive, telegenic son of one of the country's most prominent intellectual families, decides he'd like to take a crack at appearing on a quiz show.

As Van Doren finds himself getting deeper and deeper into the deception — and rising to new heights of fame as a result — Stempel looks to vindicate his bruised ego by exposing the show, and Dick Goodwin (Rob Morrow), a young, idealistic congressional lawyer looking for his big break, picks up on the rumors of fixing and decides to investigate.