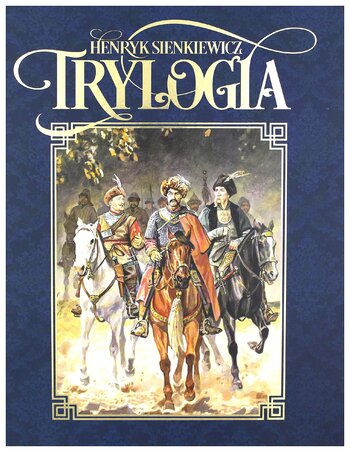 "It was a remarkable year, the year 1647, in which various portents in the heavens and on the earth foretold calamities and unusual occurrences."
—Binion's translation of With Fire and Sword
Advertisement:

The Wild Lands. The young (but distinguished) commander Jan Skrzetuski rescues a Mr. Abdank from a bunch of brigands. Or so the man says, before admitting Abdank is his coat of arms, and his real name is Chmielnicki. But he's not famous yet, so Skrzetuski doesn't give this much thought and goes on his way.

Along the way, he meets Vitriolic Best Buds Zagłoba and Podbipięta (who really wants to serve under Skrzetuski's superior, the famous prince Wiśniowiecki), and shortly afterwards, helps out two ladies whose carriage has broken down on the road. The older's a harridan, but her young niece...

Unfortunately, as it turns out, her hand has been promised to Bohun. Fortunately, she cannot stand him and likes Skrzetuski quite a lot. He's able to convince Helena's aunt to go with her to Wiśniowiecki's capital, Łubnie, and to let them marry when the war is over. In the meanwhile, Skrzetuski gets sent to the Sitch as an envoy.

And the rebellion breaks loose.

Known simply as "the Trilogy" in Poland, this series of novels by Henryk Sienkiewicz covers the lives and adventures of a group of Polish and Lithuanian nobles in the 17th century Polish Lithuanian Commonwealth and what would become Ukraine, against the real historical backdrop: while the protagonists are made up (if based on real people), you'll find many a Historical Domain Character there.

The Trilogy consists of: With Fire and Sword (Ogniem i mieczem), which takes place during Bohdan Khmelnytsky's 1647 Cossack rebellion; The Deluge (Potop), occurring during the 1655 Swedish invasion of Poland; and Pan Wołodyjowski (lit. Sir Wołodyjowski, sometimes translated as Fire in the Steppe), which concludes the saga during the Polish-Turkish wars of the 1670s. They were originally serialized in the newspaper Słowo (of which Sienkiewicz was the editor at the time).

Written between 1884 and 1888 with the intent of "lift[ing] the hearts" of the Polish people, "the Trilogy" immediately became a sensation in its homeland, where it was eventually adapted to film, the most famous being Jerzy Hoffman's versions of the saga, and is now seen as one of the masterpieces of Polish literature. It has received considerable acclaim outside its country. Its author won the Nobel Prize in Literature, after all. In some countries, though, such as Ukraine, and perhaps Lithuania, it is disliked, if not reviled, for its negative portrayal of the Commonwealth's opponents.

Several adaptations have been made, most notably the 1999 film With Fire and Sword directed by Jerzy Hoffman and starring Michał Żebrowski as Jan, Izabella Scorupco as Helena and Aleksandr Domogarov as Bohun. It is one of the most expensive Polish films ever made.

This saga gives examples of: