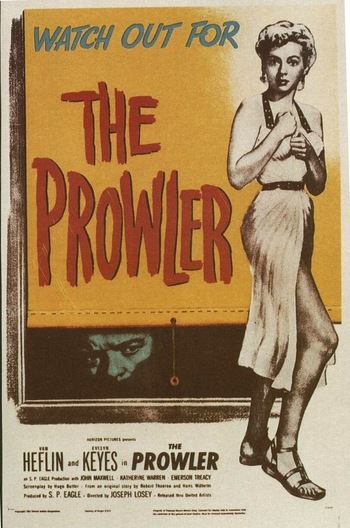 The Prowler is a 1951 American Film Noir thriller film directed by Joseph Losey, starring Van Heflin and Evelyn Keyes. The film was produced by Sam Spiegel (as S.P. Eagle) and was written by Dalton Trumbo. Because Trumbo was blacklisted at the time, the screenplay was credited to his friend, screenwriter Hugo Butler, as a front. John Huston was an uncredited co-producer, and Robert Aldrich was assistant director.

After being frightened by a peeping Tom at her mansion in the suburbs, the beautiful Susan Gilvray calls the police for help. When a policeman, Webb Garwood, arrives, he becomes infatuated with Susan, and the two engage in an affair. Susan soon ends their relationship, choosing to remain with her husband, John. However, Webb's obsession with her continues to grow, until he begins plotting to kill John and cash in on his life insurance policy.

No connection to the 1981 slasher film.