Film / Thunder on the Hill 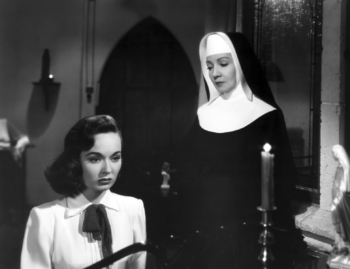 Thunder on the Hill is a British-set American 1951 Film Noir-esque murder mystery film, based on the British play Bonaventure by Charlotte Hastings. It stars Claudette Colbert and Ann Blyth, was written by Oscar Saul and Andrew Solt, and was directed by Douglas Sirk.

Somewhere in Norfolk, England, a town is forced to shelter inside a convent hospital ward due to flooded homes, headed by Sister Mary Bonaventure (Colbert). Within the crowd is convicted murderess Valerie Carns (Blyth), who has been sentenced to death for poisoning her famous pianist brother Jason.

Fortunately, the rain has postponed the execution, but Sister Mary is convinced that Valerie didn't poison him and tries to play detective herself in order to solve the mystery, with the help of Valerie's fiance Sidney (Philip Friend), other nuns, Dr Jeffreys and his sick wife Isabel, and the caretaker Willie, much to Mother Superior's annoyance.