Film / Against All Flags 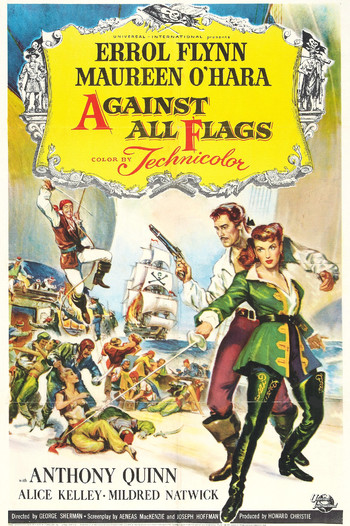 Against All Flags is a 1952 American pirate film directed by George Sherman and Douglas Sirk and starring Errol Flynn as Brian Hawke, Maureen O'Hara as Prudence "Spitfire" Stevens and Anthony Quinn as Roc Brasiliano.

In 1700 a British naval officer, Lt. Brian Hawke, goes undercover to infiltrate Madagascar-based pirates who have been attacking ships on the route to India. There is an instant attraction between Hawke and pirate Captain Prudence "Spitfire" Stevens, an independent woman who is any man's equal. Jealousies arise when Hawke, aboard Captain Roc Brasiliano's ship, rescues the pretty Princess Patma, daughter of the Moghul Emperor. Having obtained the information he set out for - the gun placements for the pirates' hideaway - he spikes the guns and signals the British fleet. The Princess is Brasiliano's prisoner however, and there is one final confrontation before Hawke can save her and make his escape.