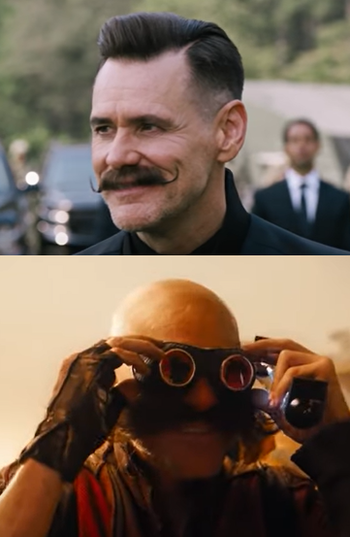 Robotnik initially: a mustached madman.
Robotnik after cracking: a bald, even more mustached madman.
"This is chaos magic, Wanda. And that makes you... the Scarlet Witch!"
— Agatha Harkness, WandaVision
Advertisement:

So you've been watching a show or movie about your favorite hero or maybe you're playing a game about them. But something seems a little off as said hero isn't quite as you know them. Maybe they don't have their iconic appearance just yet or aren't using the tools and weapons that are synonymous with their very names. Maybe they're still trying to get a handle on their powers or they just don't act like how you would be familiar with. But then the moment arrives where they have finally transformed into what you know best about them. The outfits, the powers, the attitude, it's all there and they have become the hero you know and love.

This trope is where a character, quite often The Hero, has reached the moment where they become the recognizable and iconic version of themselves that the viewer would be most familiar with. Quite common in adaptations, especially those that cover the Origins Episode or Superhero Origin. It can also tie into The Hero's Journey by showing the exact moment they become The Hero, either as part of the climax or denouement. Can also be used for The Reveal or a Wham Shot to show that a character you've been following is one that is actually one that already derives from source material.

Compare with Canon Character All Along where this trope is used as a way to show that a character is actually one that is already in the source material. Compare Flashback to Catchphrase.