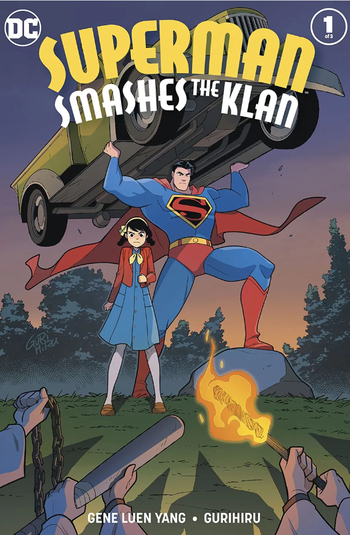 The year is 1946. The nefarious Atom Man is smashing the Metropolis Dam, threatening to flood the entire city. But fear not, because who else would come running in from across the telephone lines than Metropolis' most famous citizen, Superman! But after discovering the villain's mysterious power source, Superman will be forced to confront a part of himself he'd much rather forget.

At the same time, a Chinese-American family called the Lees are moving from Chinatown to downtown Metropolis after the patriarch gets a job there. The main focus is primarily on young Roberta Lee, and her elder brother Tommy. Away from her friends and the community she grew up in, she struggles to find her place in a town that isn't as welcoming as she might have hoped, though she does find a friend in Daily Planet reporter Jimmy Olsen, and probably develops a crush on him.

Their paths will cross as they both confront their inner demons and the threat of the nefarious Klan of the Fiery Kross.

Superman Smashes the Klan is a bi-monthly miniseries published by DC Comics between October 2019 and February 2020. Written by award-winning writer Gene Luen Yang and drawn by Gurihiru (who had previously worked together on the Avatar: The Last Airbender comics), it is a loose adaptation of one of the most famous episodes of The Adventures of Superman radio show: "Clan of the Fiery Cross."