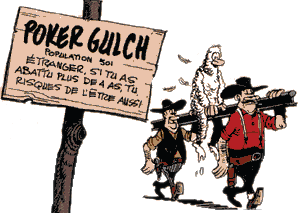 A Professional Gambler gets his comeuppance. note  If you're curious, that sign reads, "Stranger, if you have put down more than 4 aces, you risk being put down too"
Advertisement:

In The Wild West and other American Frontier settings, a common form of mob justice short of actually lynching a wrongdoer (or suspected one) is to cover him with tar and feathers, parade him through town riding a rail, and run him out of town. May be found in other settings as well, and the sticky substance may not always be tar. Tarring and feathering seems to be the epitome of American folk justice (well, if we exclude lynching, that is). The belief that it is extremely dangerous seems to be an overreaction to the belief it was purely comic, there seems to be no corroboration on the use of boiling tar for this purpose (frankly, pouring boiling tar over a person's body is moving into lynching territory). The essential aspect of the punishment was to use the filthiest feathers possible.

Often played for comedic effect, but the reality was that this was hardly a mild punishment; being run out of town without your belongings was harsh in itself, and the physical damage inflicted by the tar varied wildly, ranging from being a mild irritant requiring hours of scrubbing to clean off your skin if it's relatively cool (pine tar becomes a spreadable liquid at about 25° C / 77° F) to causing life-threatening burns if the tar is near boiling. In addition, they tended to suffer fairly severe injuries from being forced to straddle the rail.

Note: The rail in question would be a splintery wooden fence rail, not a steel track section as shown in the page illustration. Even an angry mob would be hard-pressed to lift someone on one of those.