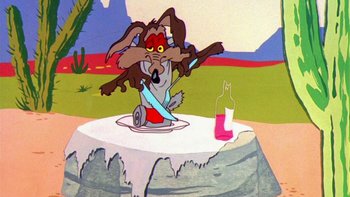 Guided Muscle is a 1955 Looney Tunes cartoon starring Wile E Coyote And The Roadrunner. It was directed by Chuck Jones.

The short opens with the Coyote preparing a gourmet meal in which the main course is — a tin can. He takes a knife and fork to the can, pauses, and, sweeping it all away (to expound on the Eatibus almost-anythingus binomium), contemplates his next move. Cue the Road Runner running right through him, the ensuing chase, and the onslaught of devices and traps. It works as well as it usually does.

It has the distinction of being the absolute last cartoon ever aired on The Bugs Bunny/Road Runner Show (which by then had become Bugs Bunny and Tweety, 2000), marking The End of a 40-year network television run.