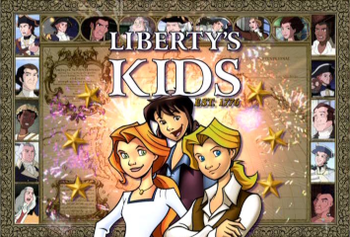 Liberty's Kids (2002-2003) is an animated Edutainment Historical Fiction series produced by DIC Entertainment in association with PBS. The series follows the events of The American Revolution, from the Boston Tea Party in 1773 to the signing of the US Constitution in 1787, through the lens of three children (and their caretaker) whom are in the employ of Benjamin Franklin's newspaper and publishing business. The major characters are:

Although the series was created for a juvenile audience (ages 7 to 14), it nevertheless takes a surprisingly sophisticated and nuanced look at the American Revolution — something that was and still is rarely seen both in children's media and in the average United States classroom — not just highlighting the heroes and achievements of the independence movement, but also addressing the less palatable aspects such as the role of slavery, mob violence and the privations that Native Americans suffered in this conflict. As a result, Liberty's Kids remains just as powerful a show more than twenty years since it first aired. Plus, that theme song is just so catchy. It's been bounced from PBS to syndication to online streaming platforms, with availability having been affected accordingly.

Tropes employed in this series include:

"I'm hoping and praying for a brighter day
I listen to my heart and I obey
How can I see it any other way?
Looking at life (looking at life)
Through my own eyes"