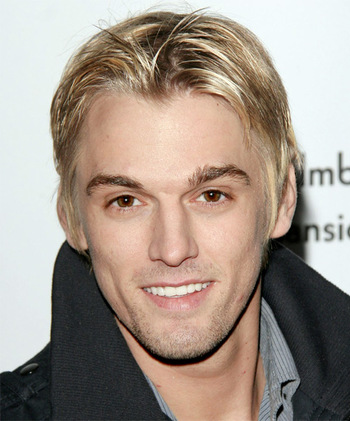 He beat Shaq when he was 12.
Aaron Charles Carter (born December 7, 1987) is an American singer. He is the younger brother of Nick Carter from the boy band Backstreet Boys.
Advertisement:

He first started recording music at the age of 8 on the heels of his brother's band's success at the prompting of his mother, who wanted to cash in on him, since Nick didn't include her in his business plans. He subsequently became world famous as a preteen idol, playing large crowds, recording three major-selling albums in as many years, and had many guest spots on kids' TV shows. He starred as JD McQueen, a pop star who's put in a normal high school, in the direct-to-DVD movie Popstar in 2006 and had a bit part in the 2004 live action Fat Albert movie. After, basically, falling off the map afterwards, he participated in the 2009 season of Dancing with the Stars, then began to pick up where he left off with his career in 2013, with starting to book and perform over that year in a tour covering the U.S. and Canada, then performed on a worldwide tour in 2014, beginning preproduction on a forthcoming album by writing songs and performing some of them. He then recorded and released an EP in 2017; LØVË, then released an album of the same name in 2018 comprising of songs from the EP and several more.